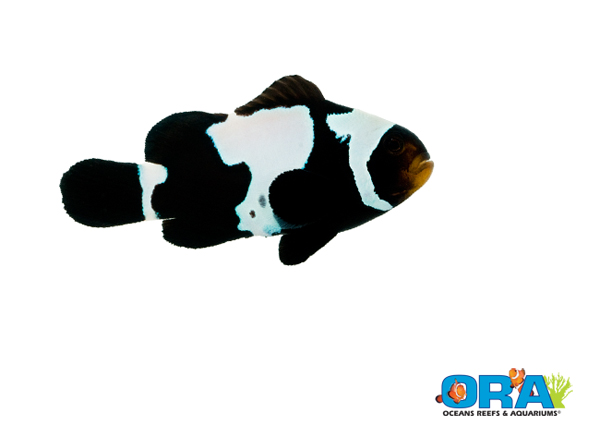 ORA announced their latest marvel of clownfish breeding on their blog yesterday, the ORA Black Snowflake Clownfish. Ever since the Picasso and Snowflake clowns first arrived on the scene years ago, we’ve been clamoring for a black clownfish with similar patterns, especially since ORA was already breeding black and white Ocellaris clowns. But it hasn’t been for ORA’s lack of trying. They have been crossing Black and Snowflake Ocellaris clowns for some time now, but have only been able to produce the Black Ice Snowflake clown, which was not the fish ORA intended to make. They were aiming for the Black Snowflake all along, and not wanting to settle, their biologists continued to tinker away.

ORA selected their broodstock from Black Ice clowns, basing their choices on color intensity, body shape, and overall vigor. These clowns were paired with unrelated B&W Ocellaris or distantly related Snowflake clowns, but early trials were unsuccessful. After spending an extensive amount of time pairing and breeding the fish, ORA slowly made their way toward the “beautiful jet-black fish with a stunning white Snowflake pattern”. Then six months ago, ORA started to see fish like the one shown above. At last they finally got their model Black Snowflake clown. Once it was old enough, the small male Black Snowflake was incorporated back into the broodstock program, and ORA has reported that the fish has been spawning with a female Black Ocellaris.