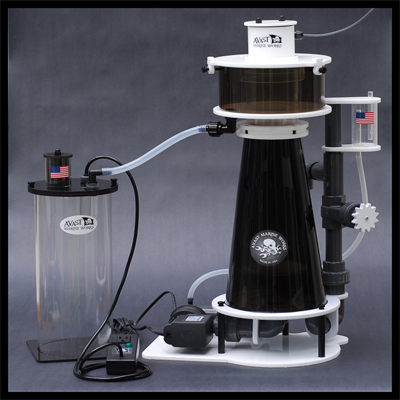 AVAST Marine Works unveiled a new piece of hardware recently with their AVAST Marine CS2 Black Pearl recirculating cone-shaped protein skimmer. After listening to the feedback from customers of the CS1 line of protein skimmers, the crew at AVAST have made several new updates to the line, most notable of which is the fact that the skimmer is a recirculating model. This new features really adds to the skimmer’s versatility. It can be run in either in-sump or external applications, the latter of which really frees up sump space for other equipment or even allows the sump to be smaller so that it takes up less space under the aquarium. This design also has the added bonus of not being affected by the water level, allowing it to run consistently virtually all of the time. Further adding to the Black Pearl’s allure is the blacked out body, which does a good job preventing some of the unwanted algae growth that usually shows up in protein skimmers. Fortunately, the body is still see through to some extent, so users will be able to see the bubble action to make sure the skimmer is working as desired.

Some of the CS2 Black Pearl’s specifications can be read below.

The pump on this CS2 cone skimmer is a needlewheel Sicce PSK-1000 that draws around 1100 lph of air while consuming only 26watts. The diameter of the cone is 8″ at its widest point, but tapers to 4″ at the neck. The Black Pearl is rated for aquariums up to 250-gallons, and the overall footprint is 16″L x 11″W x 25″H. The price for this skimmer is set at $700 and several optional accessories are available as well. These include the Swabbie, which is an automatic neck cleaner for the skimmer, and the Davy Jones’ Skimmate Locker, which catches all of the skimmer and even shuts off the skimmer when it’s full. Both of these accessories are sold separately, and each are pictured in the image above.

We like the idea of a blacked out, yet still see through skimmer. Algae can grow just about anywhere and really make an impact on how our equipment runs, and let’s face it, not everyone wants to tear down their equipment ever month or two to give it a good vinegar bath. Hopefully we’ll start to see more of the smoked acrylic products showing up from AVAST Marine Works.