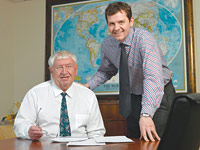 Some sad news for the pet industry, it was recently announced that well known industry icon Rolf C. Hagen passed away suddenly at his home in Montreal on October 22. Born in Germany in the 1930s, Rolf immigrated to Canada in the mid 1950s to start Rolf C. Hagen Inc., an export business that sent bird seed back to Germany. The company grew rapidly, eventually drawing in Hagen’s brothers Dieter and Horst. Each brought their own passion and energy to the company, and it quickly graduated from exporting bird seed to covering just about every aspect of the pet industry, including the aquarium trade. Over the past 55 years, Rolf C. Hagen Inc. went on to include products from brands such as Hydor and Fluval, and Hagen himself won several industry awards that included an induction into the American Pet Products Association Hall of Fame in 1999 and the Lifetime Achievement Award from the Pet Industry Distributors Association in 2004. Rolf was also awarded two very prestigious German honors, The First Cross of the Federal Order of Merit from Germany and The Highest Order of Merit, the highest honor that Germany can give to a civilian. But Rolf didn’t let all of the success and awards go to his head, as it has been said that he was a very humble and selfless individual.

Funeral services will be held on Saturday, October 29th and the family will start receiving condolences starting tomorrow. Our thoughts go out to the family members of Rolf C. Hagen and we know he will be greatly missed.

For the original story, please visit Legacy, where more information about Mr. Hagen and his life have been listed.