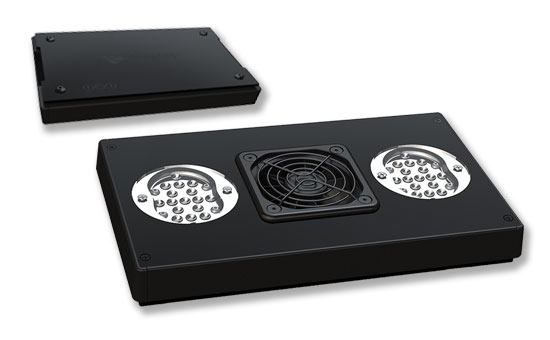 After months of waiting, the all new Radion XR30w from EcoTech Marine is finally available to purchase. This feature rich light was shrouded in mystery for several months, finally being revealed at MACNA 2011 just under two months ago. The new light fixture from EcoTech, which was designed to replace a single 250watt metal halide setup, sports two clusters of LEDs. Each of these clusters consist of a mix of Cree XP-G Cool White, Cree XP-E BLUE, Cree XP-E Royal Blue LEDs, Cree XP-E Green LEDs, and finally Osram Oslon SSL Hyper Red LEDs. Each of the LEDs is run at 3watts, with the only exception being the Cree XP-G Cool Whites which are run at 5watts. All of the emitters can be adjusted to dial in the color spectrum or even simulate lightning flashes. The other major bullet point to the Radion is its ability to wirelessly communicate with other EcoTech products, specifically the VorTech pumps with the wireless EcoSmart Wave Drivers and other Radion light fixtures. The Radion has a price point of $750 and is currently available at your favorite online aquarium equipment dealer or your local fish store, assuming of course they sell EcoTech Marine products.

A video of the EcoTech Marine Radion can be seen below.