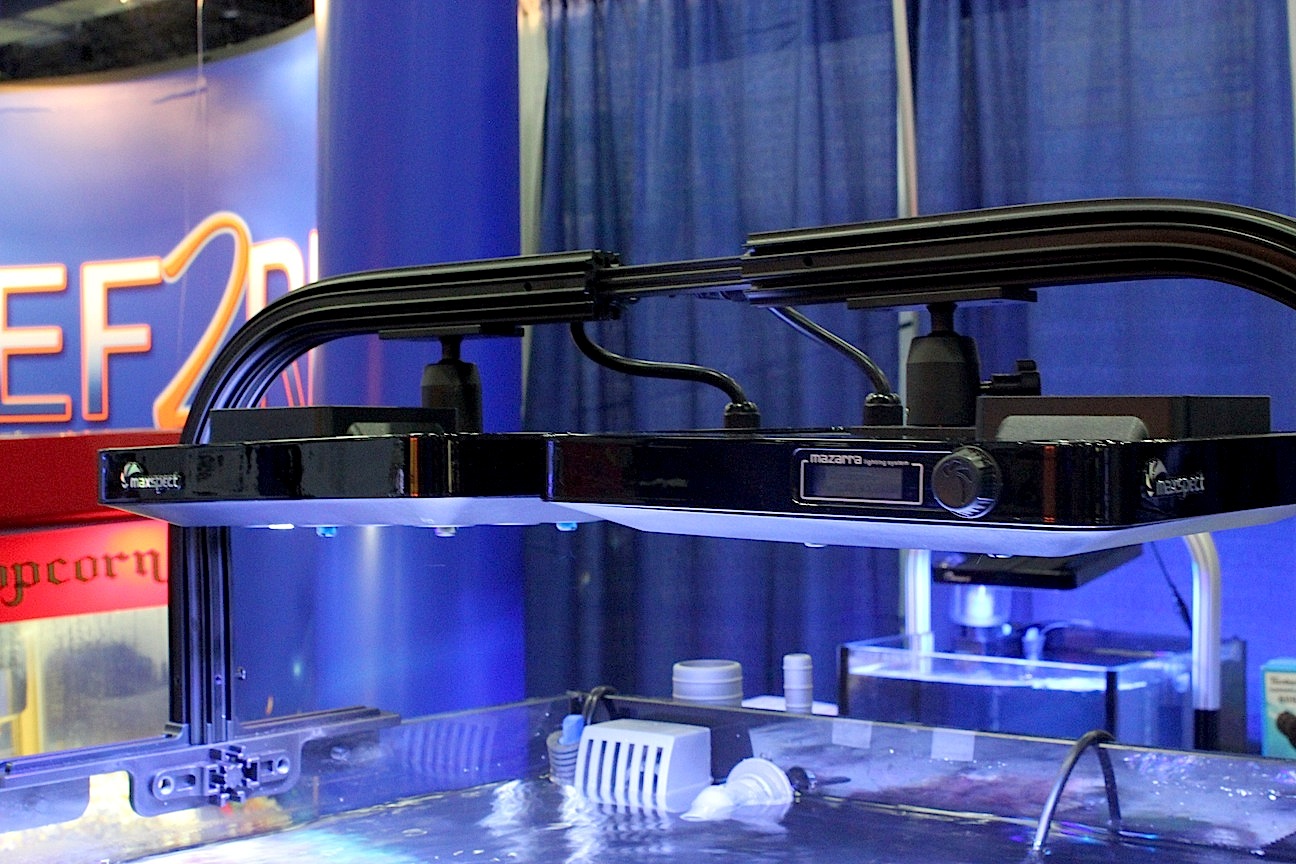 One of the big ticket aquarium items we got to tinker around with at MACNA last month was the Mazarra LED light fixture from Maxspect. We’ve seen these lights a lot on the web and have even written a few articles about them, so we naturally wanted to spend a good deal of time with the fixture and its controller to see how it performed. The LED modules were in place over a handful of aquariums and at a couple of different vendor booths, and we got a couple of different walkthroughs with each emphasizing something different along the way. The Mazarra fixture is composed of linkable modules that each use a healthy mixture of independently dimmable Cree XM-L, Luxeon Rebel, and Bridelux emitters. A wireless LED controller is also available for the LED fixture that can control up to 16 modules at once. 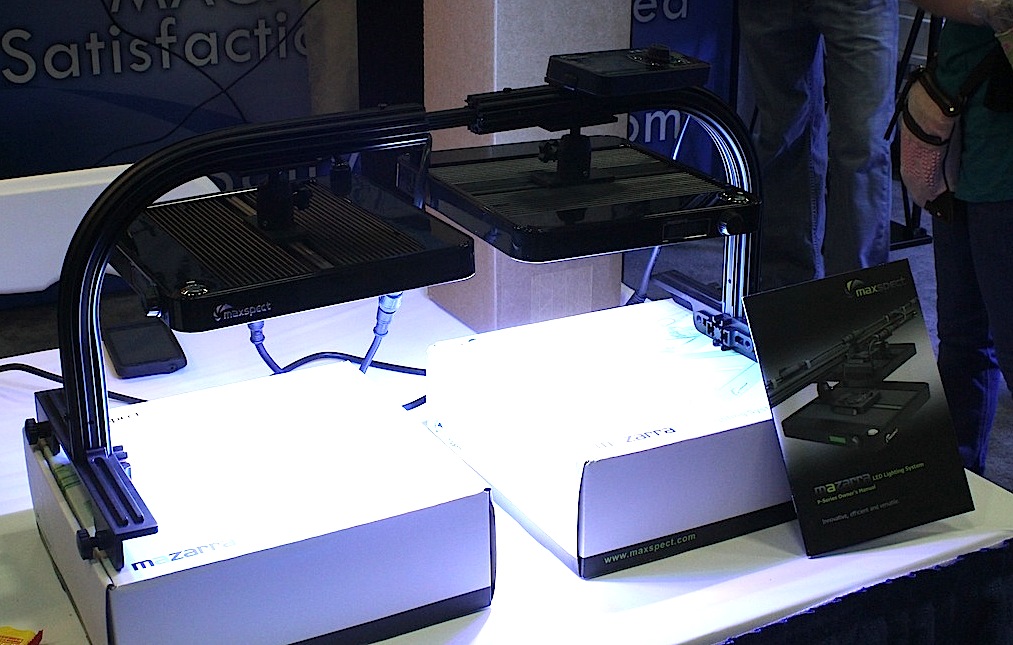 From a purely aesthetic standpoint, the Mazarra is very easy on the eyes. The individual modules are low profile and the power cords conceal easily. The best looking part of the system though, at least in our opinion, is the mounting system. Where most fixtures have bulky hanging kits and unattractive mounting legs, the Mazarra features a slick and versatile mounting arm that can be attached to a wall or directly to the aquarium. With this unique mounting system, each module can be angled differently over your aquarium to target specific corals or parts of the tank. To further enhance the look of the tank, the color of the light output can fine tuned to whatever the hobbyist desires. Users can adjust the spectrum from bright white to a crisp blue, and everywhere in between.

Functionally, the modules work well but the controller seems a bit complicated. Case in point, one of the vendors couldn’t figure out how to display the different modes that the controller has to offer. They fumbled through the dials and buttons, eventually giving up once a somewhat suitable setting was achieved. In all honesty, this particular vendor had just gotten the Mazarra that day and didn’t have a chance to learn how to use it before putting it on display. On the other hand, the guys at the Fin’s Reef booth could wiz right through the controller, displaying whatever mode they wanted to see basically on command. We tried to use the controller without any training or exposure to the product manual and found it to be a bit frustrating. It wasn’t as intuitive as it should be, and it will likely turn a lot of aquarium hobbyists off to module-based lighting system. Despite the controller’s complex menus and confusing buttons, the overall setup is still a very attractive package for reef hobbyists. Using the controller, the Mazarra can be programmed to automatically adjust both the photoperiod and brightness of the LEDs throughout the day. Additionally, a cloud cover function and a very elaborate dawn-to-dusk program are available in the controller. 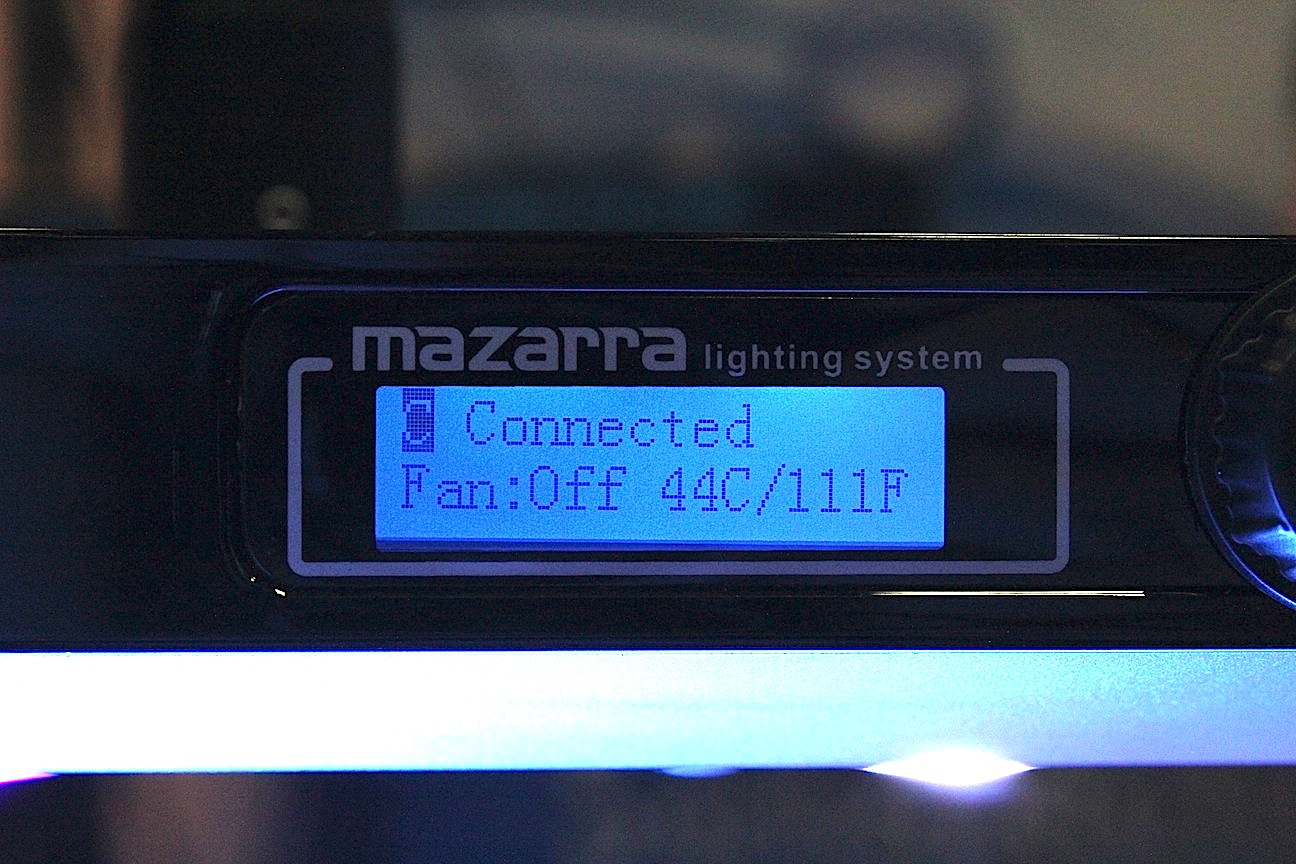 Another cool feature we found in the Maxspect Mazarra was a temperature readout on a digital display on the front of each module. The display shows the operating temperature of the module and apparently allows users to turn an external fan on or off in order to cool off the fixture. The modules don’t come with a fan right out of the box as far as we know, but may be an add-on. 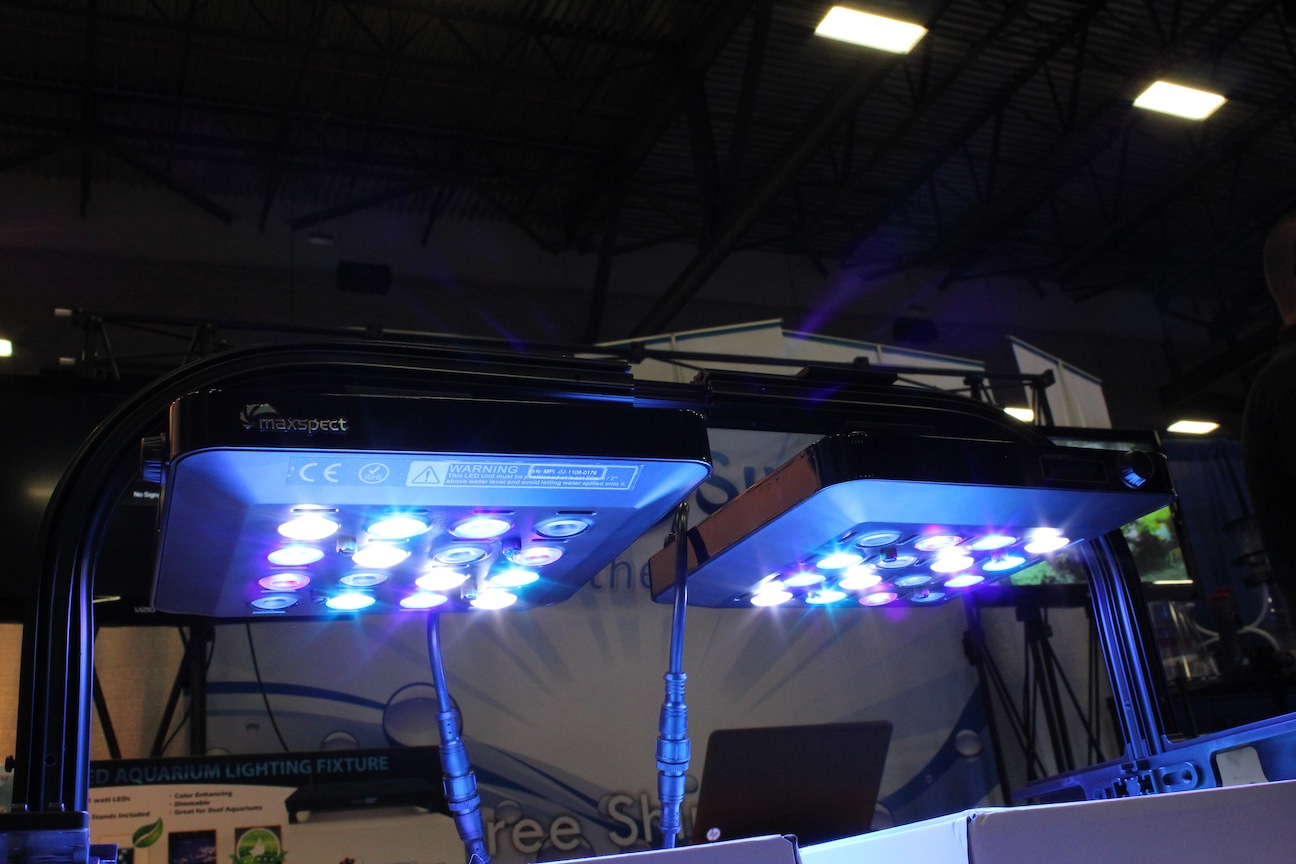 Two different models will be available. The higher end model will have four independently controllable channels, with the less expensive model featuring only two channels. Additionally, each of the modules is designed with future upgrades in mind. The modules can be taken apart and every LED and lens can be changed out with something a little different to help you dial in the color and light penetration to fit your aquarium’s needs. 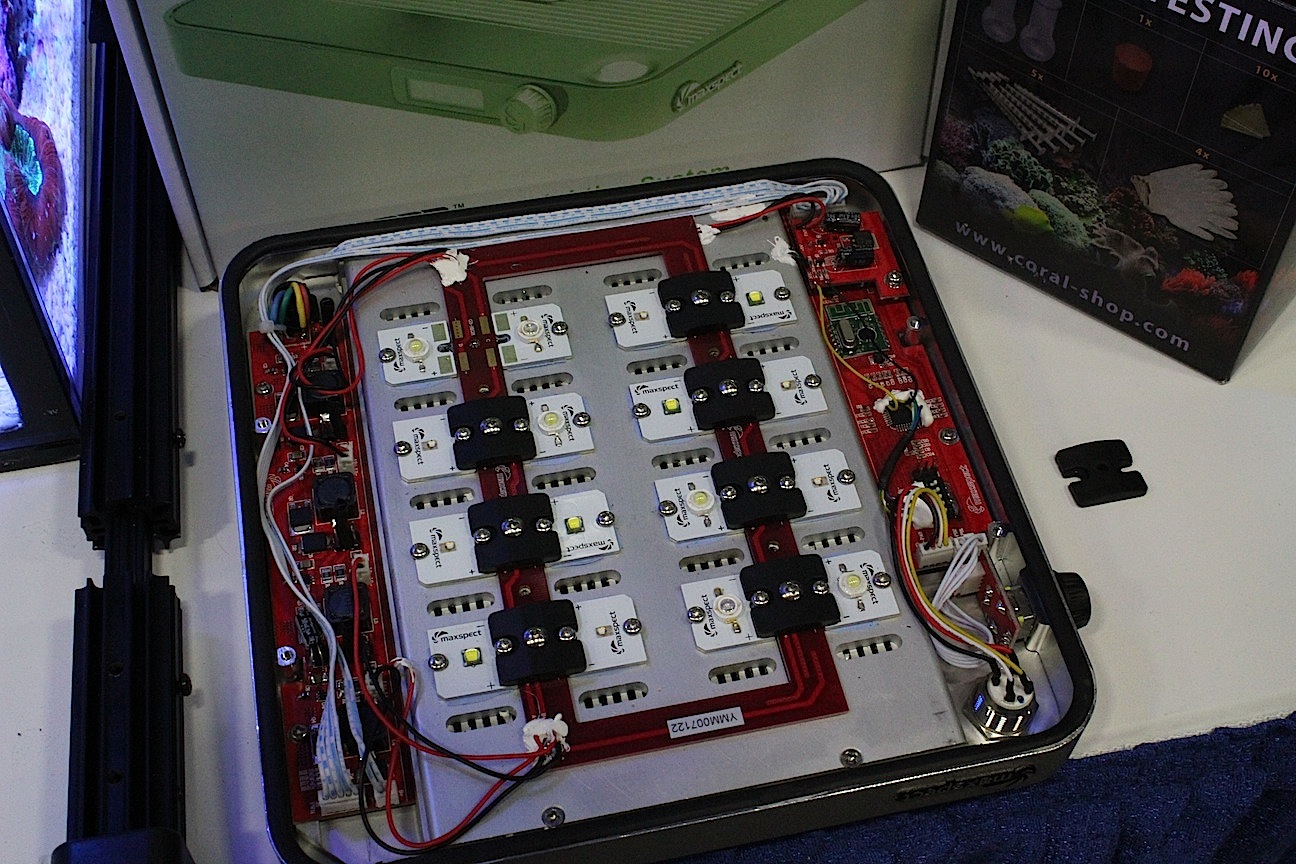 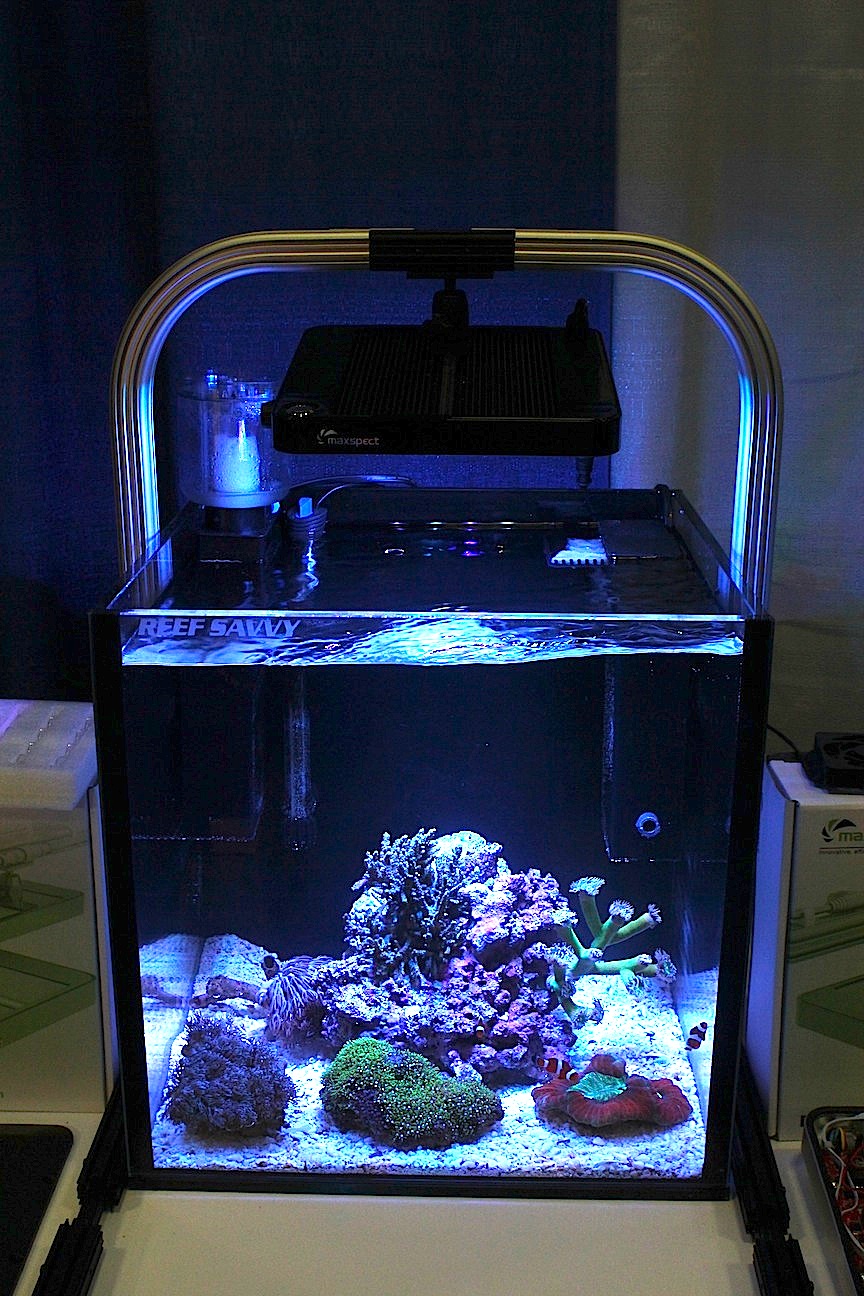 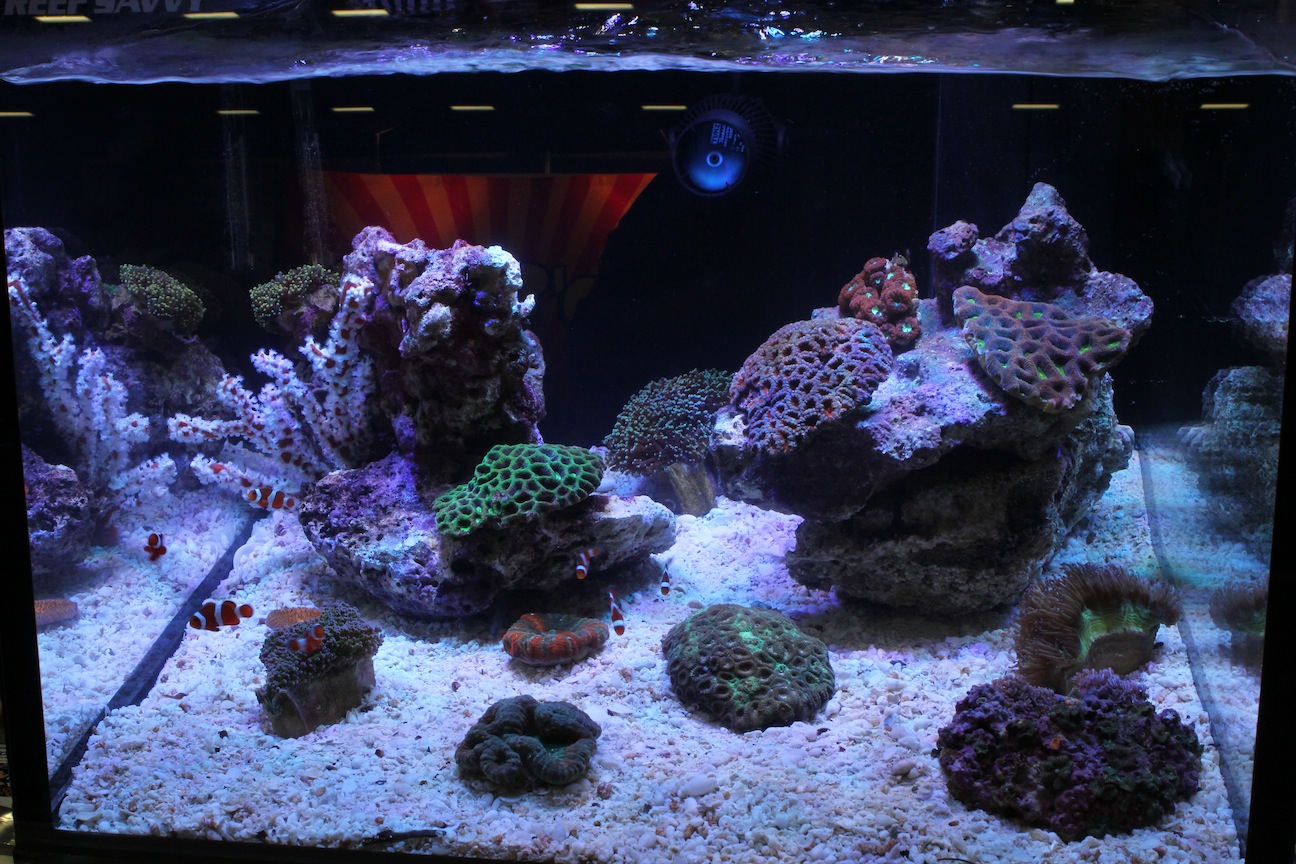