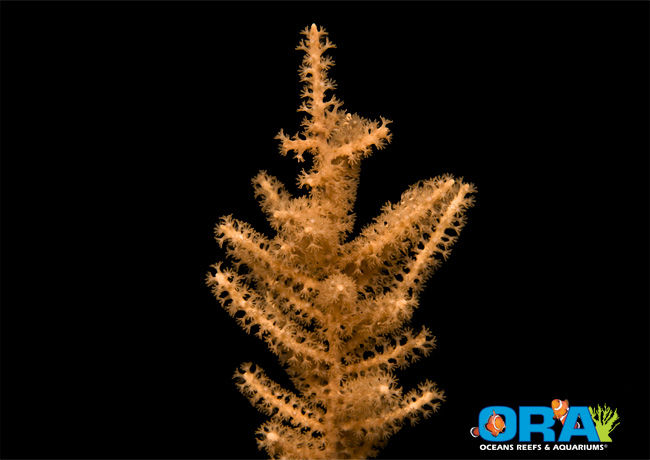 ORA is set to release another aquacultured coral onto the aquarium market. Called the Grube’s Gorgonian, this isn’t the most colorful offering from ORA, but it is certainly one with some of the longest history. Originally collected in the Philippines way back in 1990, this octocoral spread all over Europe and eventually landed in the hands of aquarium expert Julian Sprung. ORA acquired the coral, and a few others, from Julian after he decided to break down the aquarium in his office. As with any of the corals that land in the aquariums of the Flordia-based aquaculturists, the Grube’s Gorgonian was grown out and propagated, and consumers will have access to 2″ long frags attached to the signature ORA black frag plugs.

The official announcement from ORA:

Description: ORA is proud to offer a new soft coral from our collection, Grube’s Gorgonian (Pinnigorgia flava). Grube’s (pronounced Grooba’s) Gorgonian is a graceful, thin-branched octocoral that can be described as tan to pink in color with similarly colored polyps. We obtained this coral from Julian Sprung and we’ve been stunned by its hardiness and rapid growth. It has an extensive history in the Aquarium Hobby which Julian was glad to share with us:

“It was originally collected in the Philippines around 1990 by Klaus and Rosalia Grube. From their aquarium in Berlin it has spread all over Europe. So many people have it but don’t know where it came from. I got my colony from the Grubes and grew it for several years into a big bush. I gave a cutting to Peter Wilkens, who took it back to Switzerland and grew it at Wiwi Aquaria. He gave a cutting to Jean Jacques Eckert in France, who still cultivates it in his aquarium. I lost my original colony suddenly about 12 years ago, but was able to get a new cutting from Jean Jacques Eckert during a visit with him for a Récif France conference. I’ve been careful to maintain it now in several tanks. For me this coral is always a reminder of my visit to Berlin where I met Dietrich Stüber and the many wonderful hobbyists there, including Klaus and Rose Grube.”

Many thanks to Julian for introducing this cool gorgonian to the US market and helping us appreciate its extensive history! Frags will be approximately 2 inches and will come attached to a black plastic plug.