Trending
You are at:Home»Aquarium Equipment»MarineMad Software is Social Networking and More for Aquarium Nerds 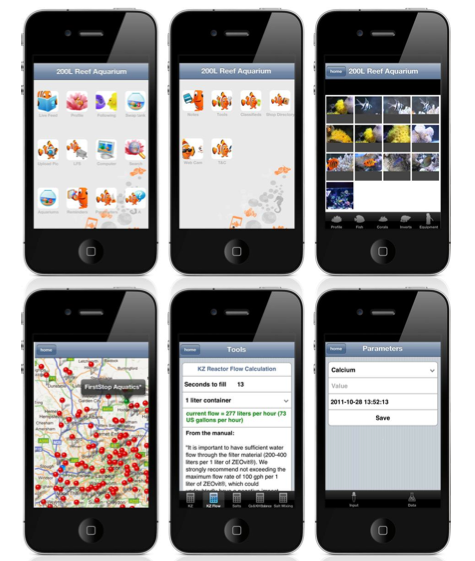 We were recently shown a new software and it’s associated iPhone app geared toward aquarium hobbyists, and it’s an interesting one that doesn’t focus solely on the aquarium like most others. It does have some aquarium related functions like parameter tracking and data graphing, but it also have some features that are aimed at connecting aquarium keepers with other like minded individuals. Being labeled as a “new concept in aquarium social networking”, the feature rich MarineMad software allows users to create and maintain an aquarium profile, create a detailed timeline showing off the entire history of a particular tank, and use built-in calculators that take data collected by the hobbyist and spit out results tailored specifically to that aquarium. But what it does for connecting hobbyists with each other looks really neat, especially for the iPhone application version of this software. MarineMad allows user to share with and follow other users of the software, as well as enter the location of nearby aquarium keepers, aquarium stores, and other interesting hotspots onto a map where they can visually see what all is around them. This will certainly help when trying to navigate to the local frag swaps or a fellow hobbyist’s house on those weekends when you’ve got aquariums on the mind.

There seems to be a ton of features in this software, but unfortunately the literature lacks a lot of the details that we crave. We’re obviously waiting for some more info from the developers, and since the software is still in development, nothing is concrete at this point. It should also be noted that the software is based out of the UK, so we’re not exactly sure how well it will adapt to US-based aquarium folks. But, time will tell. The expected release date for the MarineMad software is November 19-20 at the Aquatics Live pet show in London.