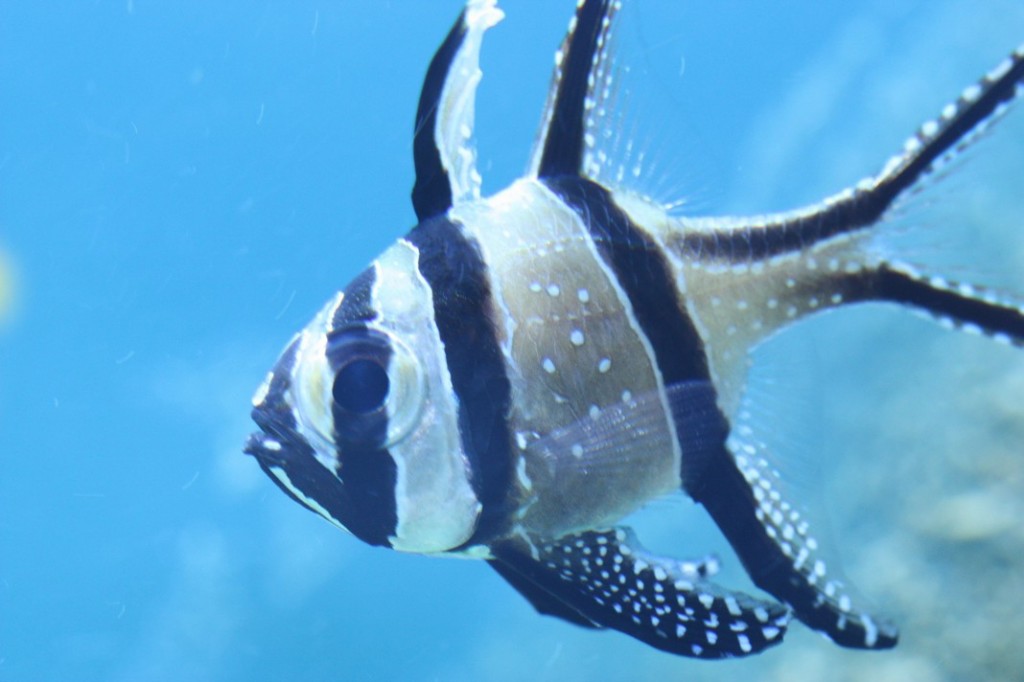 The small and unassuming Banggai cardinalfish (Pterapogon kauderni) have been the center of more than their fair share of controversies over the past several years. Their limited distribution and the overwhelming desire by hobbysts to house these gorgeous shoaling fish in marine aquariums have driven their numbers down significantly in the wild. On top of that, aquarium collectors have been blamed for introducing these fish into the non-native area surrounding Lembah Strait, which is several hundreds of kilometers north of the areas in which these fish naturally occur. Aquarium hobbyists have responded to the cardinal’s dwindling numbers by captively breeding the fish, taking some stresses off wild populations, but a whole new set of problems has popped up recently. According to Segrest Farms, a popular fish wholesaler based out of Flordia, a recent outbreak of a highly contagious and untreatable iridovirus is decimating wild-caught Banggai cardinalfish. The symptoms of the virus include a reduced appetite, listlessness, and a sunken stomach. It is being reported that infected Banggai cardinalfish have mortality rates exceeding 50% and they are dying within 4-6 weeks. In response to the virus, Segrest Farms has stopped all import and sales of this species and stores will likely start to see a shortage in the fish over the coming weeks.

More about the virus can be read below.

To date, the iridovirus has only been found in wild-caught Banggai cardinals entering the US. The virus is not affecting other species, leading the Segrest Farms importers to think the virus is species-specific. And since the virus has only been seen in wild-collected fish, it’s uncertain as to where in the supply chain the virus has originated from. It is speculated that the virus is coming from the wild and its effects are being amplified by shipping stresses and trouble adapting to captive life. The virus is said to have a long incubation time, which means fish may seem fine for a month or more before showing any signs or sypmtoms. This also means that traditional quarantining techniques will need to be tweaked if you have recently purchased or plan to purchase Banggai cardinalfish.

To help prevent the spread of this nasty iridovirus, Segrest Farms is recommending that fish stores stop carrying imported Banggai cardinalfish altogether, at least until more is known about the affliction. They are also suggesting that stores talk to customers about the ongoing issue and inform them about the risk associated with adding new cardinals to an established group. And while they have stopped selling wild caught individuals, Segrest is exploring their options with tank raised cardinals. This of course will be dependent upon the tank raised fish being virus free.

Special thanks to Keith from Super Pet World for letting us know about this issue.