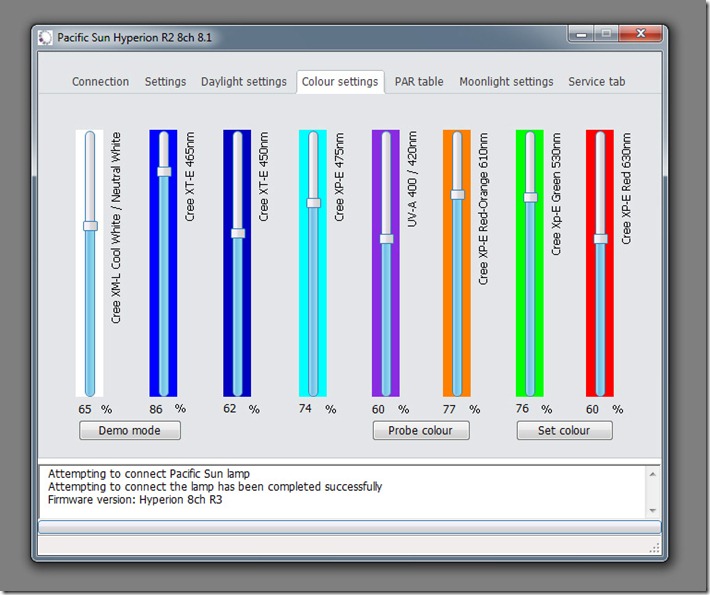 LED lighting is in full swing in the aquarium industry, and several brands have already climbed to the top of the hill by implementing a wide array of features that include brand name emitters, multiple and independently controlled channels, dimmability, and wireless controllability among many more. With all of these brands vying for the top spot, most manufactures are constantly trying to 1-up each other by offering even more over the top features, which is always a good thing for the consumers involved. One of the latest fixtures to offer a plethora of features is the Metis Hyperion from Pacific Sun. Improving on the groundwork laid out by other LED fixtures on the market, this 8-channel beast sports six different Cree emitters as well as a couple of different UV-A diodes. Each of the eight channels can be controlled independently through various methods of built-in control that include Bluetooth, WIFI, Ethernet, and even a built-in web server. In terms of external control, the Metis Hyperion is compatible with GHL Profilux, Neptune Apex, and the Pacific Sun X-Screen controller tablet. And to help give us a visual of this control, Pacific Sun has released several screen shots and a video demonstration of the software, which can all be seen after the page break.

As can be seen in the multiple screen shots, the software controlling the Metis Hyperion is rather robust. The program consists of many different tabs that control everything from independent channel intensity, to moonlights, to an advanced start-up and shutdown of the light during daily use.

Here’s a brief walkthrough of the software courtesy of the video. To start the control process users have to connect to the fixture by simply clicking on the “Connection” tab and determine how they want to communicate with the light. Once connected, there’s a huge number of things the user can tweak and adjust to their liking. In the video, the disembodied user adjusts a couple of time settings, which elicits an immediate response from the light that are set to mimic a certain time of the day. Following that, the moon light program is tinkered with, and we have to say this program alone is extremely thorough. Metis Hyperion users can simulate all phases of the moon, which cause the aquarium to glow more or less at night depending on the phase that the software is in. Once set, the phases will follow the natural waxing and waning progressions of the moon.

The next feature explored is the simple adjustment of the eight independent channels of the fixture. By moving the sliders up and down in the program, the intensity of each color can be adjusted until the ideal color spectrum is achieved. This type of intensity control is not new to the hobby, as EcoTech and AquaIlluminations both have something very similar to this in their own modules. Following the intensity adjustment demo, the “PAR Table” is then explored and it’s an area where we think the software really flexes its muscles. Up to ten time intervals can be independently programmed, with each one starting at a different time and with a different color output of the fixture. This portion of the software provides the most advanced dawn-to-dusk effects seen in the hobby today and does a much better job of mimicking the intensity changes that occur naturally through the day. And of course, if you tinker with too many settings and realize you don’t like the look or the effect, you can always hop on over the next tab to restore the software to the default settings.

And here are the remainder of the images (click to enlarge). 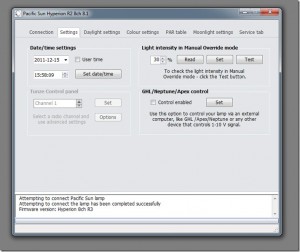 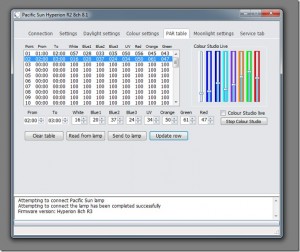 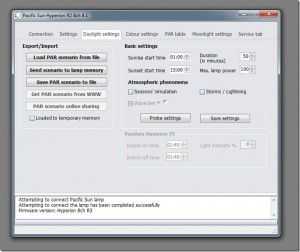 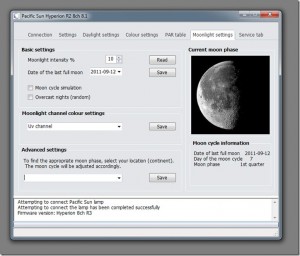