Trending
You are at:Home»Aquarium Livestock»ORA Adds Montipora confusa to Their Ever Growing List 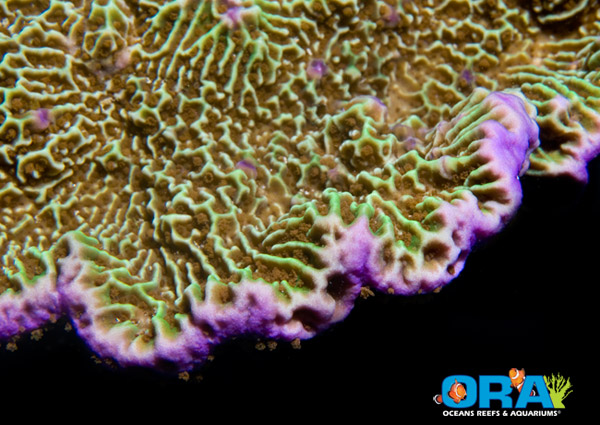 Oceans, Reefs and Aquariums is adding another notch to their bedpost, err aquarium stand, with the release of their latest coral, the ORA Confusa. Not to be confused with the Montipora spongodes, a coral that ORA has been circulating through the hobby for quite a while now, this new monti sports a deep green base and a bright pink rim. We aren’t sure of the price point these corals will likely come in at, but they should be showing up at your local fish store within a matter of days. As far as frag sizes go, if they are anything like the ORA Spongodes frags, they will certainly be generously sized and come attached to large frag disks instead of plugs.

Keep reading below to see the differences and similarities between M. confusa and M. spongodes.

While M. confusa and M. spongodes are generally very similar in appearance, it is important to note the differences and similarities between these two species as they are often mistaken for each other. Both corals have rust colored polyps, a green base color, and even similar growth forms. But it’s the little things that set these two apart. The M. confusa has a rich pink growing edge, pitted corallites, and grows in more of a plate-like appearance, though it will occasionally form vertical growths. The M. spongodes, on the other hand, has significant more vertical growth and shallower corallites. Again, very subtle differences but enough to set these two species apart.