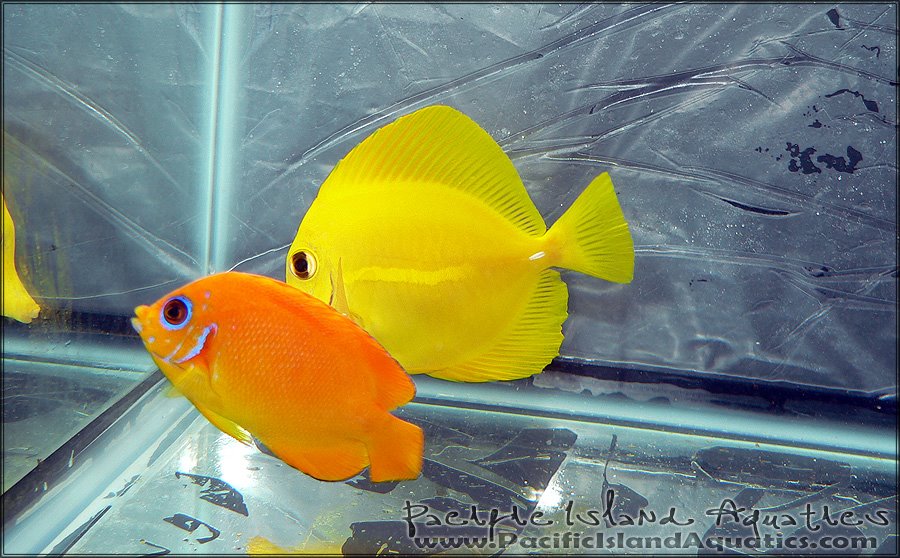 We can never get enough of those oddball fish that seem to permeate our hobby on an increasingly regular basis, and the latest unique gem comes to us from Kevin at Pacific Island Aquatics. The particular individual that caught our eye this time around is an orange colored lemonpeel angelfish (Centropyge flavissima var.) taken from somewhere in the Marshall Islands. So what’s so unique about this fish? Well, the big glaring detail is that it’s supposed to be yellow, not orange. The aptly renamed Orange Peel angelfish sports a distinctly orange hue that gently fades into a dark yellow toward the fish’s pelvic fins. To show just how deep this orange is in comparison to the norm, a yellow tang has been placed into the tank. Obviously the tang is going to look slightly different than a lemonpeel angel, but it serves as a good analog for the comparison. In addition to the orange coloration, this unique angel also has more elaborate blue markings on its operculum (gill cover). Run of the mill lemonpeel angelfish also sport the blue eye ring and some blue markings on their gill plates, but they are far less pronounced and often limited, even in juveniles. This angelfish has those blue marks all over its face, with hints on its mouth and even on the underside of its head. Perhaps this is just an elaborate aberrant pattern on an already unique fish, but it’s definitely an awesome combination of colors. And if you think this fish is only attainable by the well-funded rare fish connoisseurs, think again. The orange peel angel comes with the insanely low price tag of just $45. A plain old normal looking C. flavissima can fetch up to $30 from most vendors.