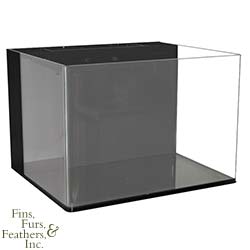 While drooling over, I mean researching the new JBJ Unibody LED, we stumbled upon an entirely new lineup of rimless Nano Cubes from JBJ USA. The Nano Cube RL, as it is called, is a sleek new aquarium that falls more in line with the tastes of the ever evolving aquarium keeper. The setup is still an all-in-one nano, which have been quite popular as desktop aquariums at work or as kitchen counter top accessories for many years, as it retains the built-in filtration. It doesn’t retain the old bulky old hoods of previous models, however. We assumed the release of the new rimless nano had a lot to do with the unveiling of the stylish Unibody fixture, which would look oh so good together, but there wasn’t a whole lot of information on rimless tanks, until now. Recently listed on Marine Depot, we get to see two models…an 8 gallon and a 30 gallon. When we first reported on the Nano Cube RL there was also a 5 gallon model, but we’re guessing it’s either been delayed or scrapped altogether.

Prices and specs below.

Update: The price on the larger 30-gallon aquarium has changed, at least on the Marine Depot website. The new price is $310 and this change is reflected in the specs above. ~ Thanks for the heads up Michelle