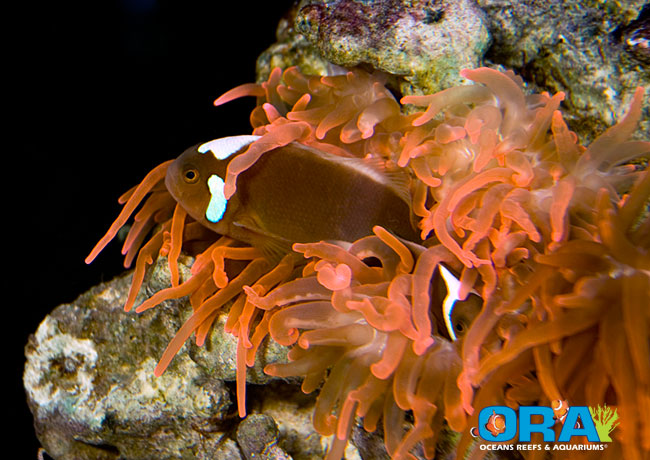 Here’s an amazing story about a beautiful and extremely rare pair of clownfish, which was recently posted on the ORA Blog. The clownfish were a pair of Whitebonnet clowns (Amphiprion leucokranos) from the Solomon Islands that were originally imported by the crew at Ocean Gallery II in New Jersey. The pair stayed at the store for roughly three years, spending most of their days in a 40-gallon anemone aquarium and receiving the best care a captive fish could dream of. They grew very quickly and started spawning around 9 months ago, which is an extremely exciting event considering just how rare these fish are. Unfortunately, the first batch of eggs was consumed by the male of the pair, which is a common occurrence in fish breeding, and the unsuccessful event led to the pair’s relocation to a much larger 300-gallon aquarium. The stay in this large system was cut short, as the lovebirds snuck back into their old anemone tank when a large rose bubble tip was relocated. At that point, the Ocean Gallery II crew decided these fish needed to be in the care of the experts, so he sent them to ORA. Little did either company know that the whitebonnet clowns would get lost in the mail.

The fish were shipped on February 6th and were expected to arrive at ORA’s facility the following morning. Tuesday came and went and no fish showed up. The customer service department of the shipping company was very quickly contacted, which is to be expected since aquarium livestock don’t fare too well during shipping anyways, but nobody knew where the fish were. The box was officially lost. Tensions were high to say the least, and nobody expected that the fish would even arrive at ORA. But the story wouldn’t be interesting if it ended there.

As it turns out, the shipping label fell off the box and the package was placed in the equivalent of a lost and found. Employees opened the box to determine what was being shipped and found the fish alive and well. Unfortunately, there was nothing tying the clowns to either ORA or Ocean Gallery II, and because this sort of thing is apparently commonplace at this particular shipping facility, a local fish store was contacted and the owner agreed to take in the two fish. Because this scenario has played out time and time again, the fish store assumed ownership and sought out a new permanent home for the Leucokranos not knowing the massive manhunt underway.

After a couple of days of being officially lost, an employee with the shipping company reported seeing a box of fish and a representative contacted ORA to give them the good news that the fish were alive, along with the bad news that they had been given to a fish store and likely sold. ORA contacted the fish store owner to try and track down the fish, and to everyone’s surprise, the customer agreed to bring the fish back to the store so they could reach their final destination in Florida.

The Leucokranos were packed back up and shipped to ORA, who received them this time, and they were acclimated to a coral holding system with plenty of anemones. As of today, the fish haven’t laid eggs for ORA, but the story is no doubt amazing. And you have to tip your hat to the gentleman who agreed to give the fish back to the store. After all, how often do you get your hands on a spawning pair of Leucokranos clownfish?