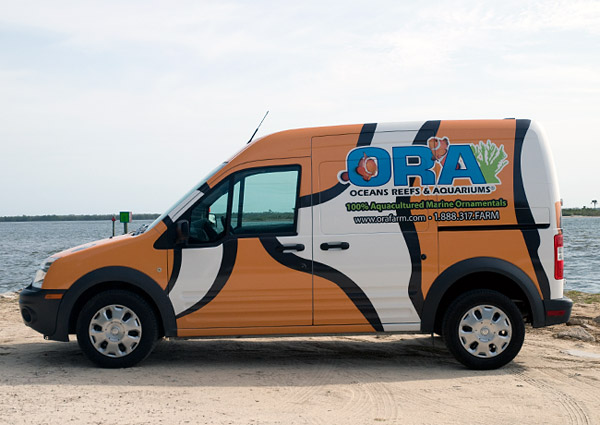 Watch out Florida motorists, ORA has a new van that they’ll be tearing up the road with. After 10 years of back and forth trips to the airport and countless saltwater mishaps, the aquarium livestock aquaculture gurus at Oceans Reefs & Aquariums have finally retired their trusty (or should we say rusty) but boring old Ford van and have replaced it with a newer and much more fuel efficient Ford Transit Connect that they have absolutely decked out in a vibrant clownfish wrap. From head to tail, this once all-white van has been transformed into the fish that essentially spring boarded ORA into the homes and aquariums of hobbyists all over the world. But this iconic fish almost didn’t make it onto the van! As the ORA staffers discussed what could go on the new vehicle, some interesting ideas were tossed out there. A simple logo on the side would have been the cheapest option, but who looks at logos alone these days. They needed an attention grabber. Then the idea of a realistic reef scene began to gain traction. But again, this wasn’t fun enough and the ORA crew eventually settled on the clownfish wrap, which is obviously a perfect fit. Still funnier, the fish breeding minds immediately envisioned the Mutt Cuts dog grooming truck from Dumb and Dumber, except with a fin covering the gas tank.

ORA promises more information on the van in the following blog post, and another image of this awesome van can be seen below. 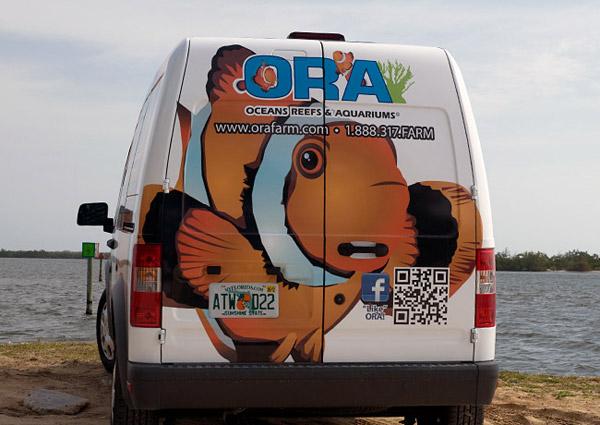