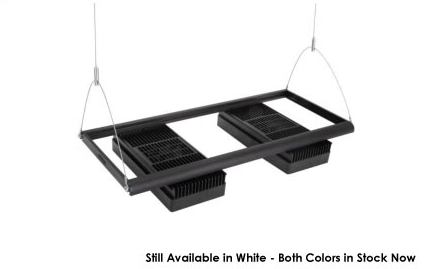 During MACNA 2011, AquaIllumination showed off their Sol and Vega modules in a stylish new color. Once only offered in iPod white, the all new black color being offered was a direct response to customer requests and was an immediate crowd pleaser. But that’s not where the color changes ended. Continuing on with that same color scheme, AI has also released their popular mounting rails in an all-black configuration.  The rails were originally only available in a brushed aluminum finish, which was definitely appealing, but the black rails are more discreet and go oh so well with the new black AI modules. Other than their color change, the rails are no different than the original rails as far as we know. We are also not quite sure when these will be available. The black rails were shown off by ReefGeek, but we haven’t gotten an official word from  AquaIllumination quite yet, though I’m sure we’ll be seeing something sooner rather than later.

Image taken from a recent ReefGeek flyer that was display on the company’s ReefCentral forum.