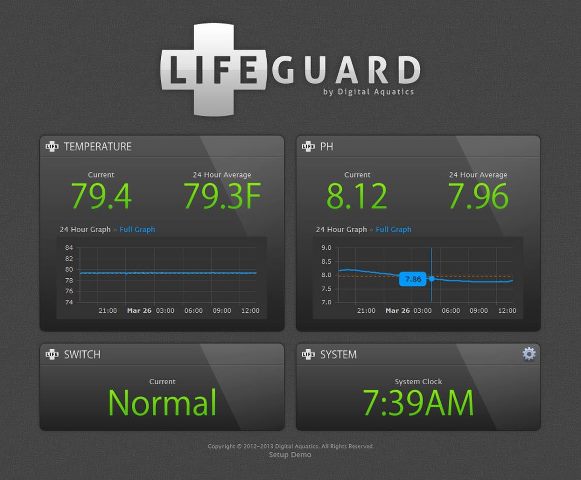 After teasing the online aquarium community with images of the hardware portion of their Lifeguard System, Digital Aquatics has finally unveiled a screenshot of the software that will serve as the graphical user interface. Viewable from just about any computer and mobile device thanks to a built-in HTML5 web server, the layout of this program seems simple and straightforward, as it focuses on the temperature and pH of the aquarium it monitors. It should be noted that the Lifeguard System also keeps track of the aquarium’s water level, but that apparently didn’t make it to this screenshot and, in our opinion, it’s not one of those parameters that needs to be displayed graphically. Despite one of the parameters being left out of the image above, there’s still a great deal of valuable information that can be accessed by the aquarium keeper, and perhaps the water level information will be portrayed on another page or in a finalized version of the software.

As can be seen in the image above, the software doesn’t just show a snapshot reading of water parameters. Instead, the Lifeguard interface displays detailed graphs, 24-hour averages, and current readings. According to the description of the image, the pH graph displays results at 5 minute intervals over a 24 hour period (blue line) alongside the 24hr average (orange dashed line). The software isn’t completely finished, as Digital Aquatics is making some final touches, but it’s clear that they’ve put some serious time and effort into the Lifeguard System. More information will be posted on the DA Facebook page and a final version (or close to it) will be on display at the Marine Aquarium Expo (MAX). On top of all that, Digital Aquatics will be giving some of the Lifeguards away, also on their Facebook page.

Image and information taken from the Digital Aquatics Facebook Page.