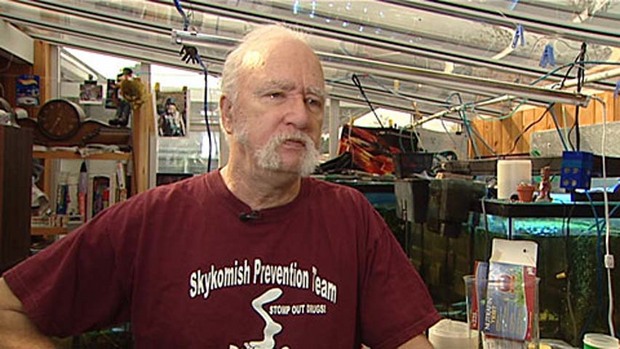 It’s a sad day when can’t chill out next to your aquarium in the peace and comfort of your own home without being harassed by the man. According to a recent story by CBC News, aquarium hobbyist Mike Baynes from British Columbia received a knock at his door and was greeted by a group of not so friendly law enforcers who were suspicious about his intense electrical usage (called “hydro” in the original article). Suspecting that the 67 year old fish breeder was actually growing marijuana, a problem that apparently runs rampant in that part of Canada, the cops searched his home looking for the tell tale signs of a grow-out operation. After the extensive search yielded no evidence of any illegal activity, the lawmen didn’t pardon themselves for their intrusion and leave the aquarist in peace. Instead, they found some trivial issues with his aquarium equipment, such as how certain things were wired, and proceeded to order him to hire an electrician to inspect each of his 19 aquariums and fix the issues. Being a retired electrician himself, Mike was able to do some of the work and save a substantial portion of money. Despite this, the ordeal ended up costing him a whopping $800 and obviously left the aquarium keeper feeling violated.

More info and a video after the break.

Prior to the inspection, a yellow notice was taped to the front door of each and every home to be inspected, including Mike’s. He saw the notice before the inspectors ever arrived, but knowing that he hadn’t bee doing anything illegal and understanding what the inspections were for, he didn’t ask questions. He cooperated fully with the law, but they still came in a tried to push their weight around.

The inspections and their resulting costs to residents who weren’t performing any illegal activities are currently being fought in court. A class action lawsuit has been filed against the law enforcement agency on behalf of the residents by the British Columbia Civil Liberties Association, which seeks untold damages.

Unfortunately for those of us that are a part of the aquarium community, this isn’t the first or last time an aquarium (or aquariums) has been mistaken for a drug grow out operation. We’ve heard stories in the past of people getting knocks on their doors from investigators wanting to inspect a home for drug activity, which only led police to finding an aquarium. One story in particular, which we vaguely recall, involved police using thermal imaging equipment to scan homes looking for meth labs and marijuana growing equipment. One evening, the cops found a warmer than usual home and they ended up breaking down the front door in the middle of the night, disturbing an older gentleman and his wife in their sleep. Like with the other situations, no drugs were found but the ordeal certainly shook some folks up.