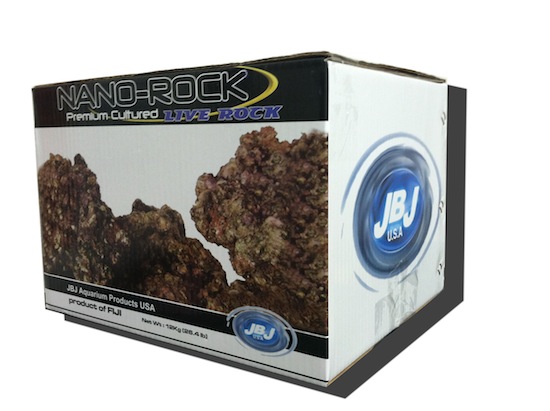 JBJ USA has been making a major push to pull many different products under their own label in recent months, all the while keeping up with current trends in the hobby. Already popular for their Nano-Cube aquarium line, they’ve also developed a few amazing products to be used on these tanks, with the most notable being the Unibody LED. We’ve drooled over the LED fixture enough, at least for this article, so we’ll turn our attention to another new JBJ product. Hoping to help fill all of those nano aquariums that they’ve sold, JBJ has released their own live rock product called Nano-Rock. This cultured Fiji live rock comes prepackaged in 25lb boxes, which is more than enough to fill a Nano-Cube of any size. This aquacultured rock is also said to be ecologically responsible (i.e. not taken from wild reefs) and JBJ promises fewer hitch hikers and less die off, which typically means a quicker cycle time as well. In terms of source, we’re not for certain where these rocks are coming from, but we can only assume their aquacultured/eco-friendly label means the rocks are mined from ancient dead reefs buried on land and then placed in large curing and seeding vats at a facility somewhere. Regardless of where the rock comes from, we certainly know where it will be going, and we love the idea of aquacultured live rock. The Nano-Rock is currently available at your local JBJ authorized reseller, though we currently don’t have an idea on price.