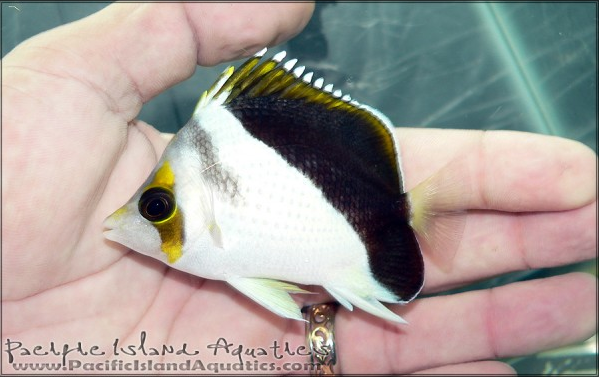 It’s not often we encounter hybrid fish in the marine aquarium industry, but when we do, we love talking about them. The latest hybrid to grace our computer screens comes to us from the gang at Pacific Island Aquatics, who have gotten their hands on a gorgeous Chaetodon tinkeri/C. burgessi crossed individual. Though each of these deepwater species is rare in its own right, hybridization seems to be particularly high among this group of butterflyfish, who all fall under the Roaops subgenus. Hybridization is so common, in fact, that many hybrid individuals are actually the result of at least two or three mixings, with a single fish showing traits from three or more different species. Pacific Island Aquatics actually has this individual listed as a possible three species hybrid (C.burgessi, C.tinkeri, and C.declives).

The reason for this big mixing pot of Chaetodon butterflies is location. It was previously thought that there was enough distance between the natural ranges of certain species, but with hybrids showing up from time to time, it’s quite obviously that the fish aren’t confined to as small a range as previously thought. And accounting for the fact that butterflyfish are broadcast spawners, meaning they shoot eggs and sperm into the water column to fend for themselves, it’s no surprise that some hybridization has occurred.

Getting back to the fish pictured above. This particular indidivual from PIA is approximately 3.25″ long with a price tag of $600. The price on a regular Tinker’s butterfly is already near the $400 mark, so this rare hybrid isn’t all that exorbitant with that in mind.