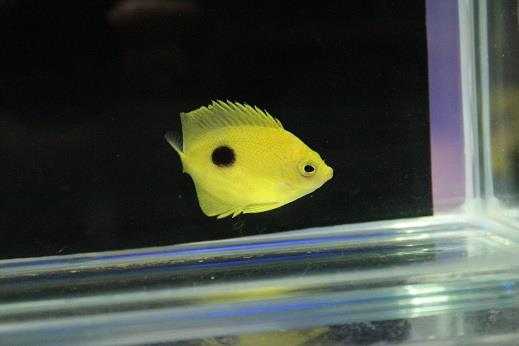 The Narcosis Angelfish (Centropyge narcosis) is one of the rarest angelfish you’ll get the opportunity to see pictures of. Much like other extremely rare fish entering the aquarium trade, the Narcosis angel is found at insane depths. Adding to the fish’s rarity is its limited distribution through the Cook Islands, Tahiti, and the surrounding areas. As far as the environment the fish prefers, C. narcosis is often associated with depths exceeding 100m (or greater than 330ft), which puts it right on the edge of man’s limits with even the most advanced of diving equipment. At these depths, one of the biggest concerns is nitrogen narcosis, which is obviously where the rare angelfish gets its name.

A video can be seen at the bottom of the article.

According to a Reef Builders article on the same fish, the C. narcosis angelfish was caught by renowned deepwater collector Rufus Kimura and sold for a retail price of $20,000.

Getting back to the fish’s ominous name, we’ll quickly look at what nitrogen narcosis really is. At virtually ever point past 30ft under the ocean’s surface, narcosis can become an issue. Shallow water divers can experience this, but it’s typically most associated with extremely deep dives. Essentially, nitrogen gas dissolves into the blood in such high concentrations that it can cause dizziness, nausea, unconciousness, and death.

For deepwater collectors, narcosis is a real threat. These divers constantly push the limits by diving too far down, staying at depth for too long, or a combination of those risky behaviors. More often than not, the diver surfaces with little to no harm. But aquarium collectors have died from this sort of thing before, and only makes the fish they are after that much more intruiging.