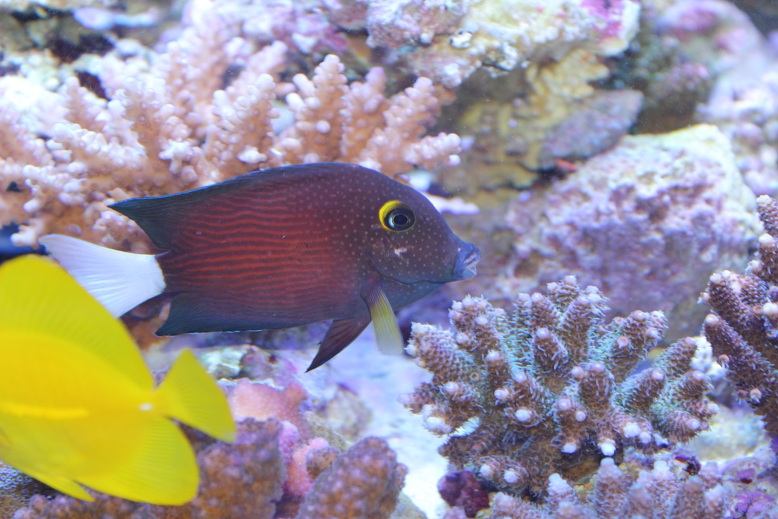 We always drool over aberrant fish, but every once in a while it’s a perfectly normal looking specimen that gets us talking. Case in point, we’ve stumbled across this awesome looking White Tail Bristletooth Tang (Ctenochaetus flavicauda) from Blue Harbor, which is neither an extremely rare or overly common fish. At first glance, one might ask what’s wrong with that Kole Tang (C. strigosus)? That’s actually a legitimate question seeing as how the fish looks like a carbon copy of the Hawaiian endemic. The Whitetail even has the bright yellow ring around its eye just like the Kole tang. What makes the fish stand out sharply is its vividly white tail, especially since the color change is so abrubpt and isolated to the tail. The similarities between the Kole and Whitetail tang are even present in the early stages of each species’ life. Both C. strigosus and C. flavicauda spend a lot of time looking very yellow in coloration, only taking on that red/maroon hue as they mature.

In terms of the natural ranges of each species, the Kole tang is a native of Hawaii while the Whitetail tang frequents the west Pacific, even being found as far out as the Red Sea and Africa according to some sources. As far as availability goes, I’ve never personally seen a whitetail tang on any kind of stock list, but online retail prices don’t put it in the top tier of rare fish, or even close to that level for that matter. Regardless, we find it to be quite an intersting fish, especially since we’re already big fans of the regular old Kole tang.