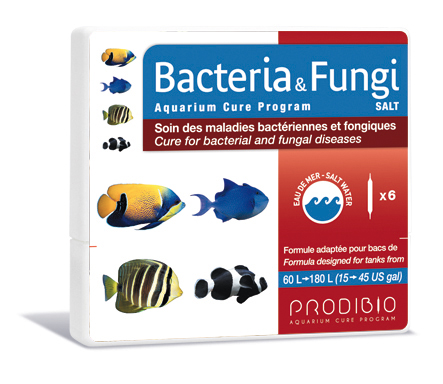 Prodibio, a French aquarium additive maker that became popular for their bacteria and liquid carbon source products, has a new series of medicinal additives aimed directly at treating certain fish ailments. Falling under their Aquarium Cure Program, these six different products come in the usual glass ampoules that Prodibio is known for, and they treat a whole slew of parasites and infections in both freshwater and saltwater applications. Three of these additives are designed for marine aquarium use, and given the focus of our site on saltwater aquaria, we’ll naturally focus on those in our discussion.

The first product in the line is the Prodibio Bacteria & Fungi additive. As its name suggest, this additive treats a wide variety of diseases caused by bacterial infections and fungi, and can even be used prior to physical signs of a disease are even present. Unfortunately, the Bacteria & Fungi additive also negatively impacts beneficial bacteria populations within the aquarium. To fix this issue, Prodibio includes an ampoule of BioDigest Start that can be dosed after the treatment period to resupply the aquarium with live beneficial bacteria. 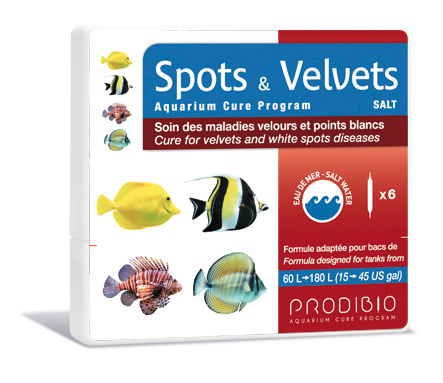 The second staple in the line, called Spots & Velvet, treats a wide variety of issues caused by parasitic protists. These include Ichthyophthirius, Oodinium ocellatum, Cryptobia, and Cryptocarion, along with any secondary bacterial infections that may arise. As with the Bacteria & Fungi additive, an ampoule of BioDigest Start is included and should be dosed after the treatment is over. 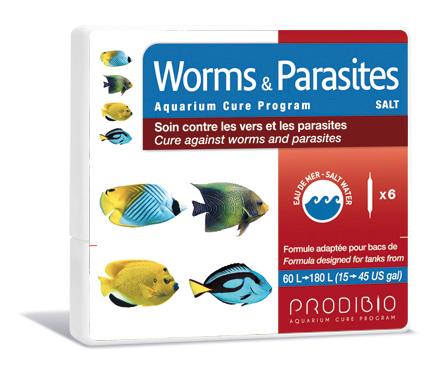 The third, and last, additive to the Aquarium Cure Program for saltwater aquariums is a Worms & Parasites product. This dosing system targets various species of parasitic worms that can be found externally on the skin and gills, or internally in the digestive system of marine fish. And just like the other two additives, a dose of BioDigest Start is provided and its dosing is highly recommended.

A six pack of each additive treats aquariums in the 15 – 45 gallon range,