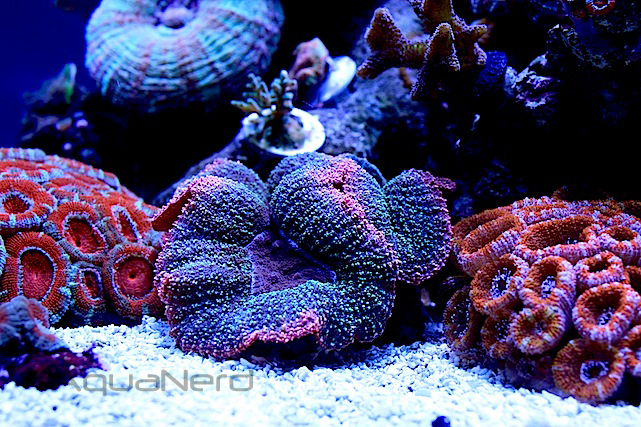 Too often, the “rainbow” and “watermelon” adjectives, among many more, are carelessly tossed around to describe corals that possess a few specific colors in even the faintest of arrangements. While the names may be justified in some instances, it’s often an overreach by the coral namer to grab the attention of potential purchasers and to hitch a ride on some bandwagon. To a similar extent, the namer is simply seeking a way to propagate his or her own name within the industry, often trying to push a coral with a trendy name to awaiting customers. These corals are usually drably colored, only barely resembling anything that could remotely be described as a rainbow or watermelon piece, yet the naming persists.

This coral naming trend is one that rubs many different hobbyists, vendors, and other long standing individuals within the trade the wrong way. They (or should I say we) look at it as purely a money grab, and because it was so successful with people like Steve Tyree, everyone else wants a slice of that pie. Now, we’re not trying to criminalize Steve’s actions or the coral naming trend as a whole, as it does have some value in company branding and tracing down a coral’s lineage, but there comes a point where the guy getting in drab looking corals takes a little too much freedom with the naming process. And unfortunately, because the rainbow and watermelon terms are so prevalent, they are often the ones vendors flock to first.

This sort of naming behavior also goes hand in hand with the overuse of blue lighting simply to enhance coral coloration for selling purposes. Most of the time, the rainbow and watermelon monikers don’t even come close to fitting the coral’s look while it is under more natural lighting conditions. When the colors go crazy under the black lights, however, eager vendors and hobbyists start coming up with wild names, hoping that they can be passed on to the next hobbyist like a bad case of red bugs.

The last bullet point to our rant is naming wild or maricultured corals. A lot of the time, a hobbyist or vendor gets their hands on a large colony that resembles, to a varying degree, a high dollar aquacultured frag and tries to increase the value of their colony by giving a cutesy name. Named corals should be strictly limited to aquacultured pieces only, and that name should be both creative and limited to that piece.

Stepping back a minute, we want to also look at the positive side of coral naming. As we mentioned above, coral names are a great way to keep track of a coral’s lineage and follow its history through the hobby. Many corals, in fact, have colorful histories that make for interesting stories. From a product branding standpoint, names are great because hobbyists can readily identify a particular coral. But with this aspect comes product responsibility and creativity.

It’s not appropriate to blast a coral with intense blue lighting and name it some random off the wall name. In a sense, that could be viewed as a deceptive business practice, especially since hobbyists usually don’t (and likely can’t) recreate those blue conditions in their aquarium and expect things to thrive in the long run. It’s also not responsible to ride on the names and successes of other corals. In most situations, the name was attached to a very specific coral, and we’re not just talking about species, but an actual individual piece. To name a similar looking piece the same name is not creative and is borderline plagaristic.

We’ll call off the dogs for now, but the main point is that if you plan on naming a coral, be honest and creative with the name. Don’t assume your coral with three colors (brown, white from bleaching, and a touch of green) resembles a watermelon coral. Don’t name wild and maricultured pieces because they look like something that has been propagated within the trade for years.