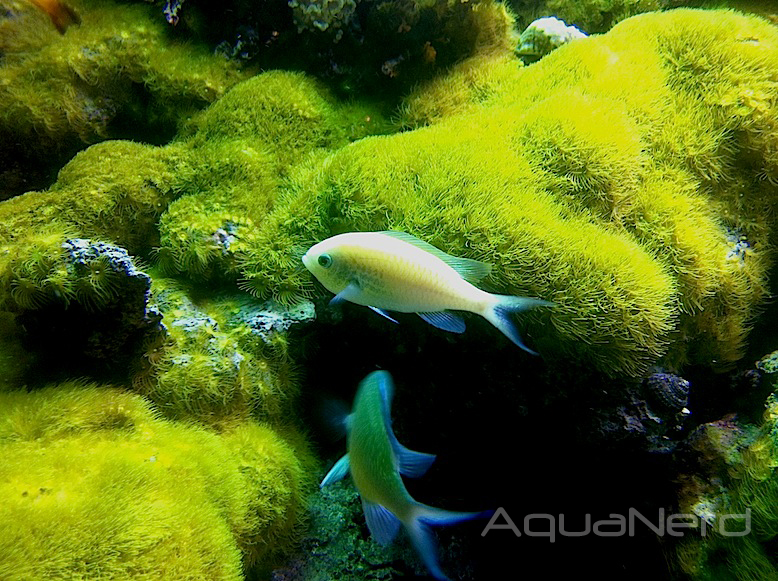 It’s funny how random aquarium oddities pop up when you’re least expecting them. During a relaxing dinner with my family at the Aquarium Restaurant in Kemah, I happened to catch a glimpse of an unusually yellow fish in their large coral aquarium. Needless to say, I wandered over the examine the fish and found it to be a xanthic blue green reef chromis (Chromis viridis). Now, there are other species of chromis that exhibit some yellow coloration, either covering the entire body or presenting as stripes. This individual, however, was undoubtedly a blue green reef chromis. It even had a touch of blue on its side just behind the pectoral fin, likely a remnant of what the fish used to look like. There was a small group of these blue green chromis in the tank, constantly harassing each other and darting around back and forth jockeying for the ideal spot. Each of the fish exhibited normal coloration, with the exception of this one yellow individual.

To make the situation even more confusing, I don’t have a clue as to how this oddly colored fish came to being in this aquarium. I’ve frequented this restaurant many times in the past few months, and given the fact that the Kemah Aquarium very rarely adds new fish to any of their systems, I’m inclined to say that this coloration developed in a normal looking chromis. And I would also have to say that this happened in a very short period of time. Sure, a single chromis could have been added to the tank at some point, but who does that? Who adds a single fish to a well established display tank at a restaurant. If the fish were something like a large or rare showpiece, I could understand. But a chromis? Not likely.

My next thought on this fish’s color was centered around its diet. Perhaps the fish was eating something that caused a yellow coloration. That idea was quickly squashed as the tank had at least five other chromis that all looked normal. Then the idea that malnutrition or the fish lacking some crucial element in its diet could be blamed, but that was also rejected since the fish is healthy and the other fish retain their normal coloration. 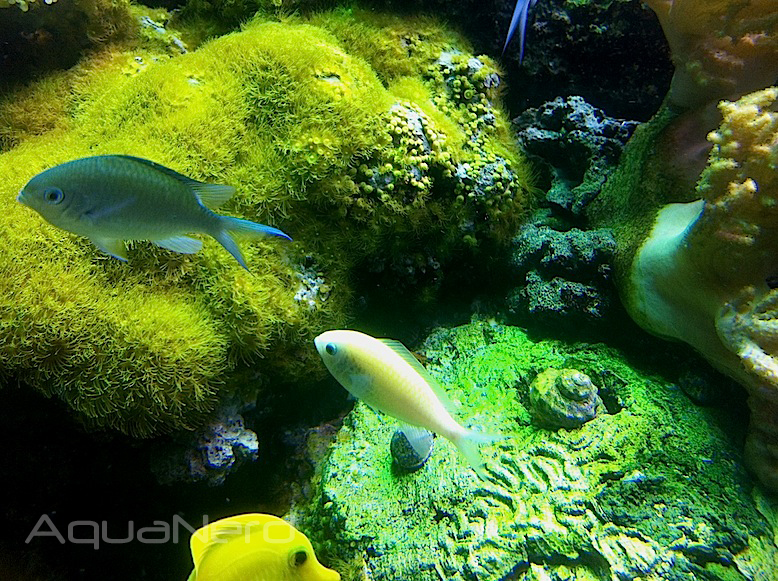 The last factor we could even begin to consider is genetic. We can’t really attribute the color to a disease or a parasite, again resting on the idea that other individuals are normal in coloration. So, maybe the fish has some underlying genetic issue causing the color. Something impossible for us to test, of course, but it’s definitely a possibility.

Long story short, the fish is certainly different for reasons we could only guess. It’s kind of cool looking, at least enough to catch my eye from a few yards away, and I’m curious to see how its coloration lasts in the long term.