Trending
You are at:Home»Aquarium Livestock»Picture of the Week, Engorged Serpent Starfish 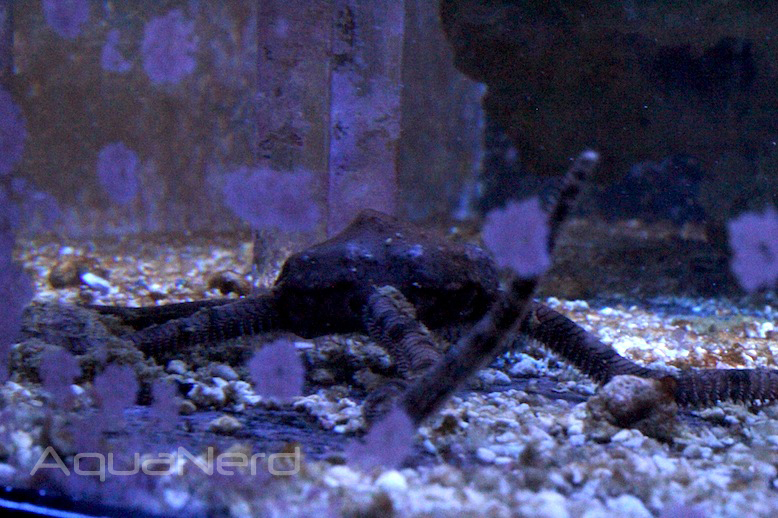 As we hinted at yesterday on our Facebook page, this week’s AquaNerd Picture of the Week is of a banded serpent sea star, but there’s something slightly off about this character. While doing a little heavy feeding in the tank, the starfish came out looking for leftovers as usual. Not wanting to keep it wanting, I proceeded to toss in a few of the larger sized mysis shrimp. The starfish, who has a body diameter (not including the arms) and thickness similar to that of a peppermint, proceeded to suck up around 5-6 good sized shrimp. To make room for the relatively huge meal, the body of the starfish expanded significantly, with a noticeable bulge on its dorsal side. After about half an hour, the bulge disappeared and the starfish no longer appeared lumpy. Instead, it just looked a little thicker, but the food had all settled in to give the star a more uniform shape

While this behavior may seem like something a bit unusual to most, it’s actually a very common occurrence. It’s usually feast or famine on the reefs, so it should come as no surprise that member of the cleanup crew can really pack it in whenever good opportunities arise. What has caught us off guard, in some instances, is the extreme expandability of the stomachs and skin on these starfish. We’ve seen instances where these stars take in huge fish or invertebrates, and it looks as if the gluttonous behavior would cause them to split open at a moment’s notice.