Trending
You are at:Home»Aquarium Livestock»Picture of the Week, Montipora Eating Nudibranch 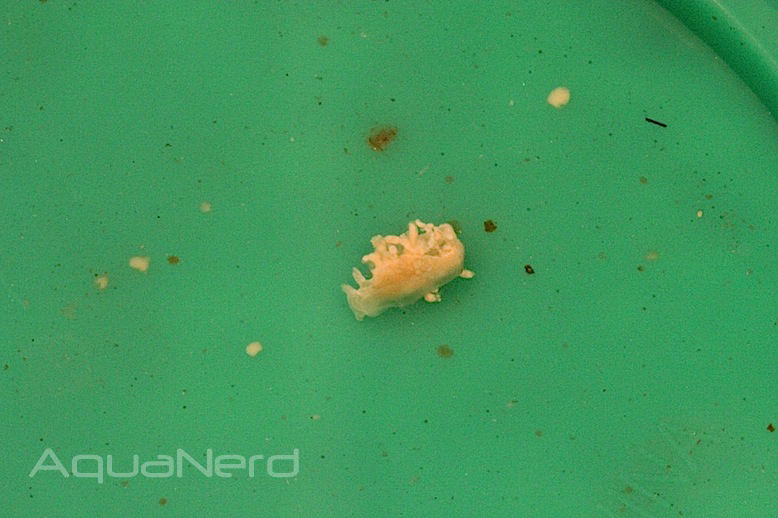 We caution time and time again to DIP YOUR CORALS!!! And while most of the time we don’t see a direct result of our dipping efforts, as we’re usually just ticking off an otherwise healthy and pest-free coral, we got to see just how rewarding the 5-minute dip process can be. On a routine visit to a local fish store this past Saturday, I picked up a particularly beautiful Montipora undata mini colony, which happened to be an aquacultured piece that was grown from a small fragment of a larger colony in one of the display reef tanks. My tank was, and I guess still is, devoid of the montis that were oh so prevalent in my past aquariums, so I figured it would be  a good piece to start with. Little did I know that the lone Monti coral would be packing a stowaway.

Upon returning home, I opened the bag and added a few drops of Lugol’s Solution, which has a pretty high iodine concentration. Within 30 seconds, the tiny invertebrate hitch hikers were swimming around in agony. These included a few pods here and there, but also a white wriggling clump that caught my eye. I knew right away what that clump of white tissue was. It was a Montipora Eating Nudibranch, and it was a big one. I removed it from the bag and placed it into a specimen cup (for later use in this article), and before I could even close the lid on the cup, I noticed several more wriggling worms in the bag. After a few minutes, I counted a total of six nudibranchs, each one of them measuring about a quarter of an inch long give or take.

I proceeded to move the coral into a new container of tank water, adding more of the iodine solution, and while waiting the aftermath of that second dip, I sent the original batch of worms on a trip down the porcelain express. After a few consecutive dips, I felt confident that the worms were eradicated, and placed the coral into the tank.

The unfortunate downside to the dipping process, besides being very stressful to an already stressed coral, is the fact that it does almost nothing for any eggs that may be waiting to hatch on the underside of the coral. The good thing about my situation is that the aquarium doesn’t contain any Montis (other than this frag), so even if I had placed the new frag into a quarantine setup, the outcome wouldn’t be any different. I don’t believe in full tank treatments of specific ailments, so if the worms make a comeback, I’ll simply remove the lone Monti and do another series of dips.

Circling around to the big moral of the story, DIP YOUR CORALS! Don’t think for a minute that you’re immune to coral pests because you buy from a reputable source.