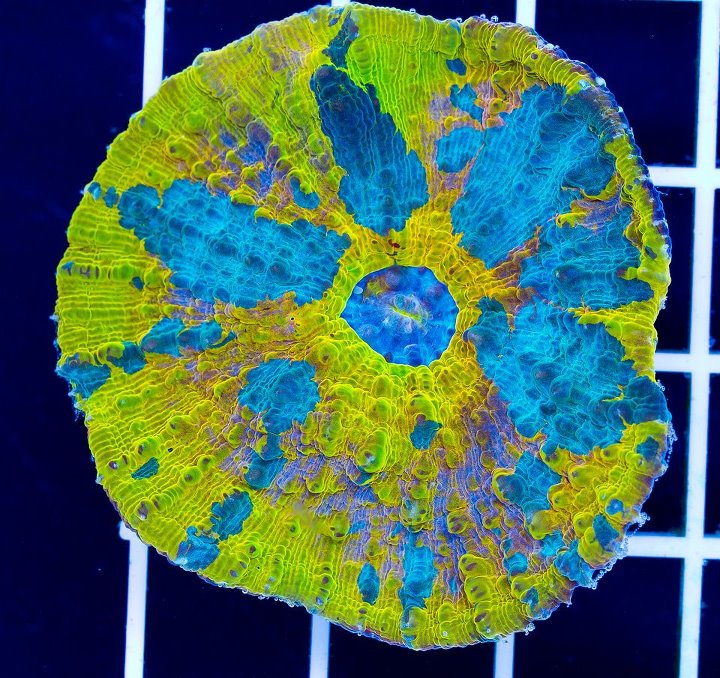 Cherry Corals is known for their top notch WYSIWYG corals, but their latest offering is a big step up, even for them. Their latest and greatest, called the ‘Burning Sky Chalice’ is a dazzling coral that sports almost a three dimensional look to it. If you gaze at the center of the coral, the yellow seems to jump right out of the computer screen. Besides the bright yellow splatters, the one of a kind chalice sports a deep blue base color, which seems to provide a ton of dimension, as well as a hit of purple. The colony measures roughly 2″ across, easily making it an instant mini colony, though there only appears to be one mouth on this coral. The retail price on this bad boy is set at $1000, which considering its size when compared to other chalices on the market, it’s really not that bad. Wait, did I just say that a $1000 mini colony wasn’t that bad?

Well, let’s think about it. A decent named chalice that’s got one or two eyes can fetch upwards of $500 or more depending on the demand. And while the ‘Burning Sky’ only has one eye from what we can tell, it’s size and color are outstanding. This isn’t your typical watermelon. This is a one of a kind for sure. Getting back to the coral’s price, it would appear that we’re not the only ones who think the price is right. The coral was sold shortly after being listed.