Trending
You are at:Home»Aquarium Livestock»Moorish Idols and Goldfish, the New Odd Couple 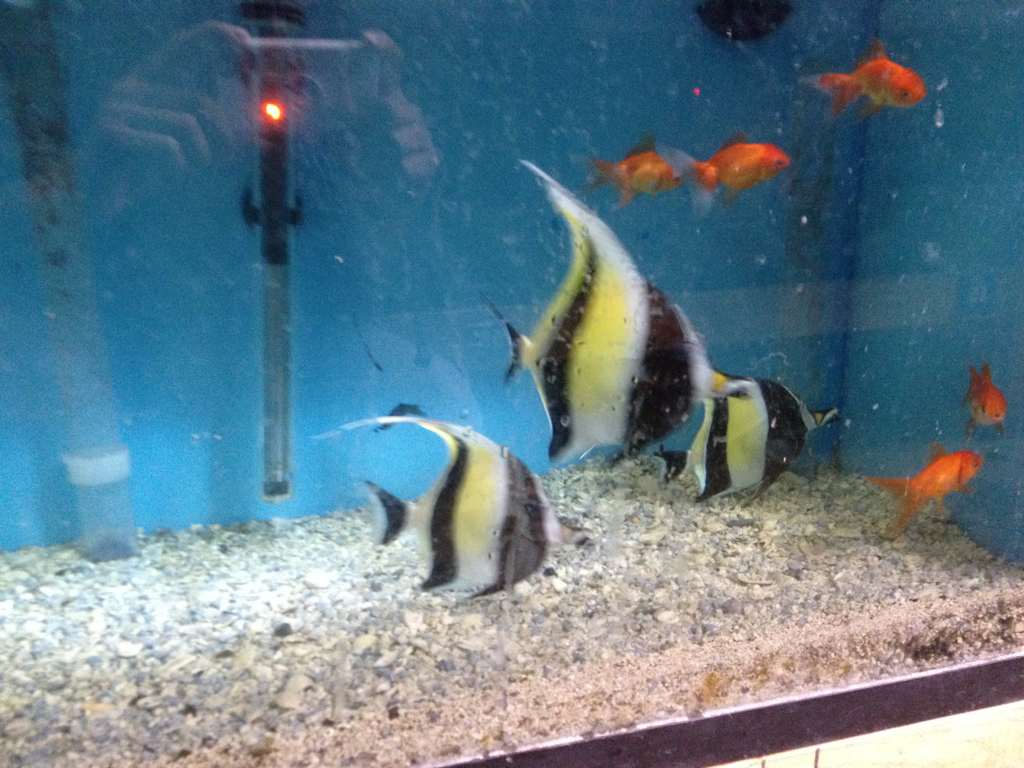 Move over Felix and Oscar, there’s a new odd couple in town. That’s right, the image above shows two species of fish that you would have never in your wildest dreams thought you’d see together in the same aquarium…a trio of moorish idols and a handful of goldfish, yes, goldfish. Obviously these fish couldn’t possibly coexist in the same environment, as one is found around reefs all over the Pacific and the other is a staple of the freshwater industry. So what gives? Who deserves to be taken out back to the tool shed and taught a lesson for this obvious blunder of fish mixing?

Now that we’ve riled everyone up, let’s put down the pitchforks and extinguish the torches for just a second. According to “akaimal”, who took the image above and posted it on Reef Central, the three moorish idols were only in the freshwater aquarium temporarily. The brief freshwater bath lasted 10 minutes and was only done to remove any potential parasites from the fish prior to putting them into a system with other fish. After being in the goldfish tank, the three moorish idols were moved back into a saltwater tank.

That said, please don’t take that as being an excuse from us. We certainly don’t condone freshwater dipping as a method of parasite removal simply because it is so harsh on the fish being dipped. The situation gets exponentially worse when you do the freshwater dip in a functioning aquarium full of livestock. If the extremely harsh freshwater dip doesn’t stress out the already stressed out fish even more, then the ammonia in the tank surely will, especially given how dirty goldfish tanks usually are. Sure, the site of moorish idols and golfish in the same tank may provide for an “entertaining” scene for some shoppers, but it’s actually a disgusting display of ignorance.

And from what we hear, the store that mixed the moorish idols with the goldfish has a long history of bad behavior. The store was once a wholesale facility that was called Global Aquatics, but came under fire after local stores who purchased from them found out they were selling to walk-in customers and was listing items on sites like Craigslist. To make matters worse, the “wholesale” company was developing a bad reputation for mistreating their fish and their customers. Global Aquatics was eventually sold and renamed to Xzotic Aquatic World, who structured the business as a retail store open to the public. From the looks of it, Xzotic doesn’t seem to be doing any better under the new ownership.

Special thanks to Reef Central user “chgoblknazn” for sharing this story with us.