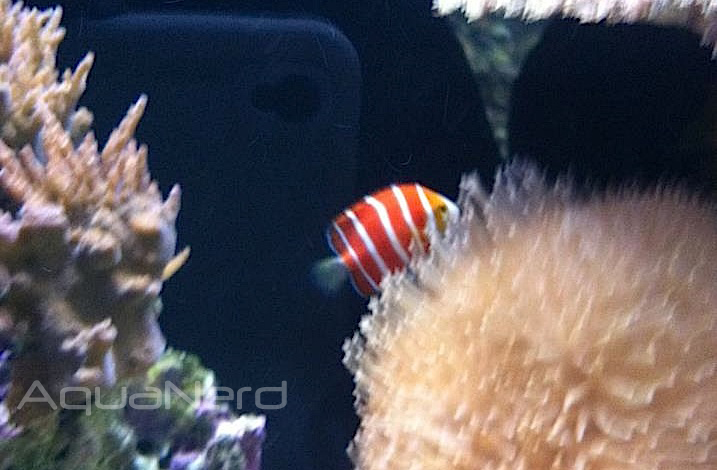 The latest image to grace our regularly recurring Picture of the Week is not exactly the clearest one, but because of its subject, it’s actually the most exciting image we’ve ever featured. The picture, which we also showed off on our Facebook page over the weekend, is of one of the rarest fish you’ll ever lay eyes on, the Peppermint Angelfish (Paracentropyge boylei). The fish can be seen here in a cell phone image taken at the Waikiki Aquarium in Hawaii. The angelfish, as we’ve eluded to, is such an extremely rare individual. Only a couple are known to exist in captivity, and sightings of this fish in the wild are few and far between. This is entirely due to the fact that it lives at extreme depths and has a limited distribution, which only aids to the mystery and excitement that surrounds the species.

This particular individual was caught by the world famous diver/fish collector, Richard Pyle. After catching the extremely rare beauty, he donated the fish to the aquarium as a long-term loaner, and it was rumored that a second individual was heading to the aquarium as well. Unfortunately, we’ve not seen or heard any further information to verify those rumors, but we can certainly hope.

To make the specific aquarium that houses this fish even more interesting, it also houses the Abei Angelfish (Centropyge abei). Believe it or not, but the Abei Angelfish is even rarer than the peppermint, as there is only one known to be in captivity.

Not satisfied with the cell phone image above? We totally understand, that’s why we’ll be posting DSLR quality photos in the coming days.