Trending
You are at:Home»Aquarium Livestock»Sailfin Tangs Showing Up in Florida Waters 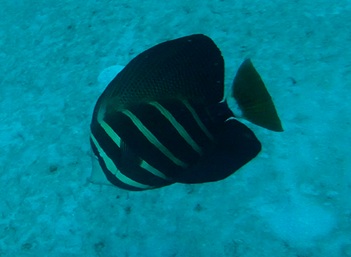 Move over lionfish, there’s another non-native species trying to get cozy in the waters around Florida. According to a recent report by the U.S. Geological Survey, a lone sailfin tang (Zebrasoma veliferum) was spotted at the north end of the Boynton Beach Reef off the eastern coast of Florida on August 20th. The fish, which had an estimated size of 28cm (approximately 11 inches), was photographed in its non-native habitat but apparently it was not collected. This sighting is, at the very least, the fourth one involving a sailfin tang in Florida waters and a second for the Boynton area. The other sightings were in Key Largo in 2001 and Delray Beach.

The sailfin tang, much like the lionfish, was most likely imported through the aquarium trade and somehow released into local waters either intentionally or through some aquarium mishap. Either way, the handful of sailfin tangs that have shown up in Florida don’t seem to be reproducing or taking over the area like the lionfish have. That said, it’s still obviously not good to have non-native fish occupying an already overtaxed area where another invasive species is already wreaking so much havoc. The sailfin tangs could potentially out compete local surgeonfish species for resources. Fortunately, this species doesn’t have built-in defenses like venomous spines, meaning local predators could take advantage of their presence.