Trending
You are at:Home»Aquarium Livestock»Segrest Farms’ New Cultured Live Rock is a Great Alternative to the Real Stuff 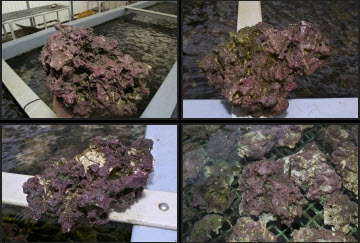 Segrest Farms, a Florida-based wholesaler of freshwater and marine ornamental livestock, has just announced their newest addition to their expansive offering, a cultured live rock alternative. This live rock is 100% cultured indoors in a massive closed system and the result of a proprietary culturing process, which Segrest states took years to perfect. This painstaking process ensures that the rock will be completely pest free, meaning it won’t have those pesky Aiptasia anemones, coral eating flatworms, nusciance algae, crabs, fish eating Eunicid worms, and all of the other hitch hikers that make our reef keeping a living nightmare.

As for the rock’s composition, it originats from Florida and is made from vast limestone deposits built by ancient reefs. The cultured live rock is said the be porous and lightweight, and “similar to some of the higher-quality commercially available base rock”. What separates the Segrest Farms aquacultured rock from the base rock is the fact that it is seeded with a combination of carefully selected pest-free live rock, coralline algae, copepods, and beneficial macroalgae. The rock is then allowed to sit in giant vats that are fed by filtered natural sunlight until they are cured and ready to ship out.

The rock will be available to U.S. based pet retailers and will ship directly out of their Florida facility. This means that there will be less time in transit and far less die off than rock that’s coming from the Pacific, which means shorter cycling times and a better retention of those beneficial organisms that make the rock “live”.

The price of the rock will be determined by the fish stores, so no word on what to expect the per pound price to be. We will have better images of the rock shortly, and we’re told that we might get some of the rock for some hands-on time.