Trending
You are at:Home»Aquarium Equipment»Innovative Marine to Offer NUVO Nano 16 without Lights for Cheaper Price 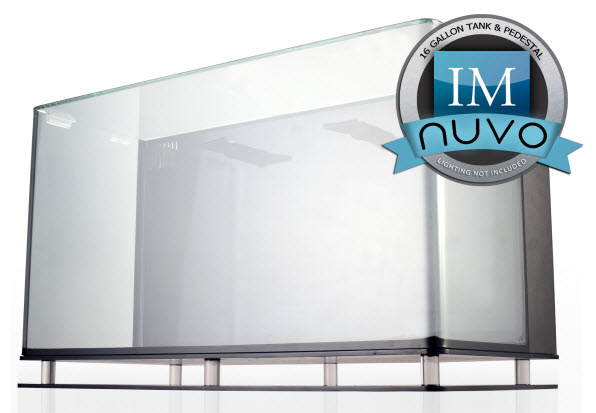 Here’s some good news for the nano aquarium connoisseur. Innovative Marine is about to officially announce that they will be offering their NUVO Nano 16-gallon Desktop aquarium for sale without the stock lighting. While this isn’t groundbreaking news, it’s certainly good to hear if you’ve been eyeing an IM nano aquarium but wanted to use a light fixture already in your arsenal or just wanted to go a different route altogether. The tank will come with all of the other bells and whistles (filter media and basket, return pump, glass top, and acrylic pedestal), with the only change being that the two stock 8W LED clamp lights will not be included.

As a side effect to being offered without a light, the Nuvo 16-gallon Desktop aquarium will see a small price drop if customers decide to go that route. A tank with lighting normally sells for $349 while the lightless nano aquarium comes in $100 cheaper. This new configuration should be made available starting this week.

This move by IM comes in response to “overwhelming” requests have the option to offer this particular aquarium without lights, and we’re happy always happy to see an aquarium company adapting to the needs of its customers. We haven’t been told if other aquariums in the lineup will follow suite and be offered without lighting, but it would only make sense for them to.