Trending
You are at:Home»Aquarium Livestock»ORA Reveals Amphiprion barberi Clownfish Have Been Misidentified for Decades 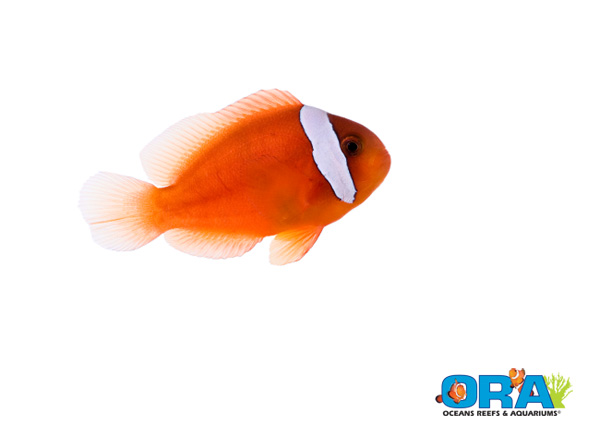 Fish, coral, and invertebrate misidentification is far too common in the marine aquarium hobby. While this is mostly tied to uninformed and inexperienced hobbyists who have nothing but internet images on which to base their incorrect identification, a fish comes around every once in a while that fools even the experts. Such is the case for one particular ORA clownfish, which until just recently, had been misidentified for roughly 15 years as revealed on their blog. ORA had been spawning and rearing what they thought were Amphiprion rubrocinctus clownfish, but after genetic testing, it was determined that the species was actually A. barberi.

The misidentification of the fish didn’t start with ORA, but in fact goes back much farther. Gerald Allen originally described the fish in 1972, grouping reddish-orange clownfish from the South Pacific (Fiji, Tonga and Samoa) into the species A. rubrocinctus. In a 1980 publication, Allen determined that the geographical distribution of A. rubrocinctus excluded these fish, and classified the South Pacific Island fish as a color variant of A. melanopus. Then, in 2008, the fish were redescribed once again. Gerald Allen, Joshua Drew and Les Kaufman published that these fish were their own disting species, A. barberi. Unfortunately by this point, the fish had already been propagated in the aquarium hobby for nearly two decades.

All of ORA’s original broodstock, including their misidentified A. barberi pairs, were acquired from Aqualife Research Corporation in the Bahamas. ORA received the fish sometime in 1996-1997, well before the 2008 publication renaming the fish, so they have been sold as A. robrocinctus all this time. Well, that is until ORA got genetic confirmation that the species was in fact A. barberi. A fish was sent to Joshua Drew, one of the authors of the 2008 publication, who confirmed the fish’s identity as A. barberi.

While this discovery probably has little impact on the day to day lives of normal aquarium keepers, it just goes to show two very imporant things. For one, even science makes mistakes with identifying the creatures we put in our aquariums. We chalk it up simply to a lack of available information on the species, which obviously changed over the years and led to the distinction between three different species and the “creation” of an entirely new one. The other major thing to take note of is the attention to detail that ORA has paid to their fish. How many other breeding organizations go through this much trouble to make sure their fish are properly identified? You and I both know that it costs a great deal of money to organize a DNA test on a fish.