Over the past few years, AquaIllumination has usually waited until the big trade shows like MACNA to unveil their latest and greatest products and company related news. This year, however, they let the cat slip out of the bag a little early…and what a big cat it is. Instead of making some minor alterations to their current lineup or releasing updates for their AI Controller or Director software, they have an entirely new fixture called the AI Hydra that will be hitting store shelves in a very short time.

AquaIllumination has yet to release the information on their new Hydra on their website as of yet, but interestingly, the product showed up on the Salty Supply website with all sorts of those juicy details. Unfortunately, because there hasn’t been an official announcement from AI, we’re left with nothing but digital renderings of the new module…but that doesn’t mean we can’t talk about it at length.

So, what’s the Hydra got to offer? For one, this new module sports seven distinct LED colors that include Cree XT-E Cool White, Osram Oslon Deep Red, Cree XP-E Green, Cree XT-E Royal Blue, Osram Oslon Very Deep Blue, SemiLED 415nm Violet, and Edison Opto 400nm UV. These LEDs are spread across four clusters, each containing five LEDs. The total power consumption is 95w. Comparatively, the AI Vega has around 20 color choices that are strictly made up of Cree and Osram Oslon emitters. The LEDs for the Vega are also spread across four clusters at the same power consumption.

Focusing the light from the Hydra into the aquarium are the standard issue 80 degree lenses, though 50 degree lenses are an option for deeper aquaria. The clusters themselves are a tad different from those of the Vega, as they are slightly rotated. We’re not sure what effect, if any, this has on the light output of the Hydra, but it does make distinguishing between it and the Vega a bit easier.

With all of these similarities to the Vega, you’re probably asking how the Hydra is different. Well, it all boils down to color choices and channels of control. The Hydra has fewer of both, which is also why it comes in $100 cheaper at  retail price of $399. Obviously this puts it in the same price point as the AI Sol, but we fully expect the Sol prices to drop to some extent. AI hasn’t hinted at a price drop, but we feel it inevitable, even if only slight. 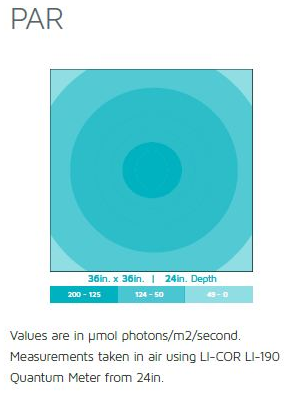