Trending
You are at:Home»Aquarium Equipment»CAD Lights Unveils BR-2 Biopellet Reactor for the Biggest of Home Aquariums 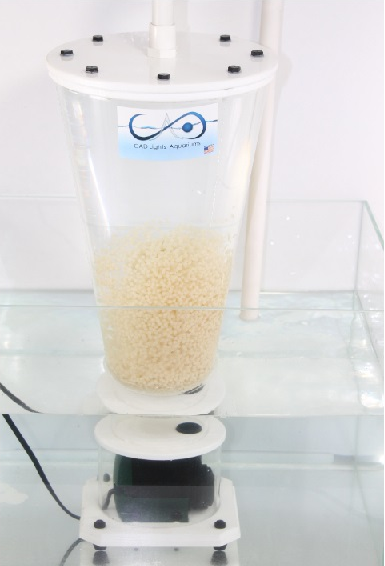 Back in January, CAD Lights turned the biopellet world upside down, literally. They introduced their BR-1 Conic Bio-Reactor, which featured an upside down cone shape that had a great price point and reasonable footprint considering its 750-ml capacity. The reactor saw only a few structural changes since its introduction, which were limited to the plumbing, and CAD Lights has finally decided to expand the lineup to include the massive BR-2 reactor. This new reactor is almost three times the size of the original model, sporting a 2200-ml capacity that allows it to handle the beefiest of home aquaria.

The CAD Lights BR-2 has a 6.5″ x 6.5″ footprint and is designed for aquariums ranging from 200 gallons up to 1500 gallons, depending on the bio load of course. A 625gph pump sits at the bottom of the reactor, directly under the pellets allowing for a space saving design. The pump pushes water upward through a perforated distribution plate and out of the plumbing located in the lid. The BR-2 lacks the re-circulating plumbing of the BR-1, which is interesting to us considering the BR-1 was originally introduced without that plumbing as well.

The BR-2 has a price point of $349.99, which is a drop in the bucket considering the costs of running those big 1500 gallon aquariums. In addition to biopellets, this new monster reactor can also use carbon and GFO, though a special kit is required when running the GFO. If you recall, tumbling GFO leads to a crumbling of the media which can cause a dark brown dust to be spread all over everything.