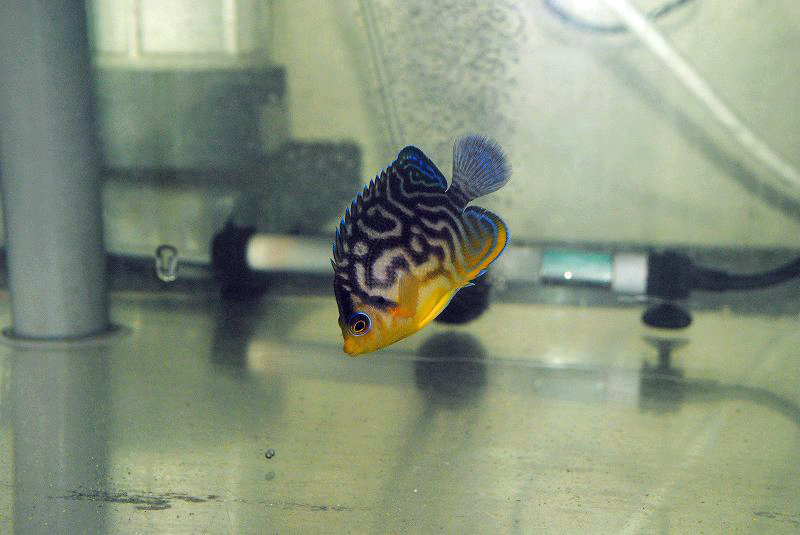 We have a special place in our hearts for hybrid fish of all varieties, but this amazing hybrid angelfish featured on the LSS Laboratory blog really just makes us smile. The 6cm long angelfish looks amazing with its vibrant coloration and insane patterns, as it takes the best features from both of its parents and blends them together in a such a way that it elevates the look altogether. For the hybrid offspring to be significantly more beautiful than either of the parents isn’t exactly common. This Philippine beauty is cross between a multibar angelfish (Paracentropyge multifasciata ) and the Venustus pygmy angelfish (Paracentropyge venustus), and if you think that it’s a one of a kind angel, you’d only partially be right. To date, at least three individuals have surfaced in the aquarium trade, all of which have gone to the Asian market.

According to a post on Glassbox Design, this hybrid was first seen more than 20 years ago, and in none other than Japan. At the time, nobody knew what it was, and because there wasn’t near as much hype around fish back then, it sold for an insanely cheap price. The industry saw its second specimen about 5 years ago, again through the Japanese aquarium industry, and it looked just as gorgeous as the one we feature today. This current specimen is also headed to the Japanese aquarium marketplace, to no surprise, and we hope it will join the tank of some serious collector who really tanks his hobby seriously.

This is a seriously beautiful and rare fish, and although we’d never see it in person, barring some major miracle of course, we sure would love to see more photos and a video if the fish gods were so kind enough.