Trending
You are at:Home»Aquarium Equipment»Retailers Need to Stop Advertising Aquariums Like This 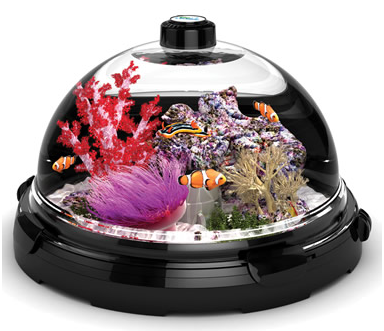 While doing our routine perusal of our favorite social media sites, we came across this atrocity of a desktop pico aquarium from Hammacher Schlemmer, an online store to buy really random stuff. The visual depiction of the aquarium is beyond misleading, and combined with its mind boggling description, an uninformed potential aquarist might try to recreate an expensive and delicate mini reef ecosystem like this that will only fail. And it’s because of systems like these that so many fly-by-night hobbyists get an aquarium in the first place, only to last less than a year before calling it quits. We encourage everyone to avoid systems such as these like they’re the plague, and we are openly chastising any company that attempts to show the aquariums in this way.

We don’t have a problem with showing an aquarium’s potential. A well stocked aquarium takes years to accomplish, but the aquarium above shows one very gross error in judgement. In that digitally rendered reef scene, meaning these animals were all placed into the tank with some help from Photoshop, big coral colonies and hard to keep nudibranchs fill the 3-gallon space alongside everyone’s favorite clownfish. While clownfish are generally acceptable in small aquariums, three of them in a pico is three too many. A tank this size cannot accommodate a single clownfish, let along three with various corals and invertebrates to complete the scene.

The description of the aquarium isn’t any better. The Hammacher Schlemmer text claims that this aquarium has superior filters that are five times better than other setups. Apparently, the system turns the water over 20 times per hour, meaning it moves about 60 gallons per hour. While this turnover isn’t bad, we all know that a simple carbon and mesh filter isn’t enough to keep the aquarium clean. Carbon alone does nothing for ammonia removal, and it’s unlikely that a 3-gallon aquarium will have enough live rock and sand to provide the surface area needed to grow enough bacteria to handle a full blown reef, as depicted.

The aquarium has a diameter of 16″, with an acrylic dome serving as the viewing window. To make the situation worse, there is a clean plastic accordion sheeting between the dome and the base, which stretches out to double the capacity of the aquarium when the dome is lifted. There’s no word on the aquarium’s lighting, so we doubt there is any. Yet, they depict corals in the background that would lead potential hobbyists to believe that corals can be housed in the aquarium.

Getting back to the point, these aquariums are absolutely terrible and should never be used for saltwater. I’d even be hesitant to use one as a freshwater tank.