Trending
You are at:Home»Aquarium Equipment»SpectraPure Introduces Their Own Dual Chamber Media Reactor 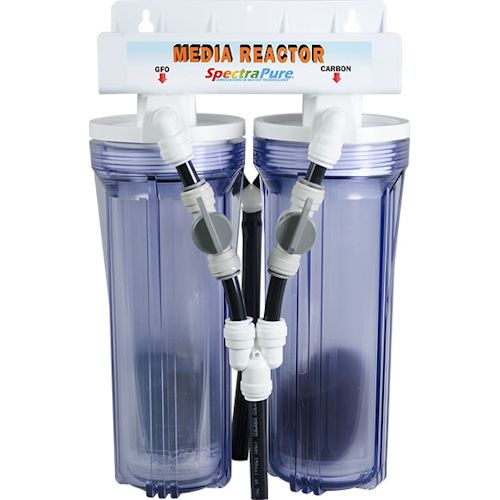 Aquarium hobbyists have long known the benefits of activated carbon and granular ferric oxide (GFO) as major parts of the filtration system, and for the most part, the two have been used conjunction with with each other. While one took up dissolved organic material, the other absorbed photphate and silcates, both polishing and cleaning the water in the process. The immense benefit of both of these filter media products of course prompted aquarists to use multiple reactors, oftentimes with multiple pumps. Thankfully, the aquarium industry responded to the demand with dual stage reactors from the likes of Bulk Reef Supply, and now the other water filtration specialists at SpectraPure have their own version as well.

While the SpectraPure Dual Chamber Media Reactor may appear remarkably similar to the BRS model, it differs in one very distinctive way. Where the BRS model has two chambers plumbed inline, the SpectraPure version has them plumbed up separately. Instead of flowing from one chamber to the next, the water line feeding the reactor splits off to independently feed both chambers simultaneously. While keeping the two separate in this manner may or may not be important isn’t even the point. What’s important here are the valves that can be used to regulate the flow rates through each chamber.

GFO requires low flow speeds, as it is not desirable to tumble this media. If the grains do tumble, they could break apart and find their way back into the aquarium. Carbon, on the other hand, can have high or low flow rates, it really doesn’t matter much. Lower flow rates improve contact time, while higher rates move more water through the media. Getting back on track, another benefit to this layout is the fact that you could take one of the canisters offline, with the other still filtering water. This is ideal if say the GFO is exhausted before the carbon, or if there is some other issue.

The retail price for the SpectraPure Dual Chamber Media reactor is set at $74.99, though it is currently on sale for $69.99. This is about $10 more than the BRS version, but given the fact that you can independently control the flow of each chamber, it’s well worth the extra green.