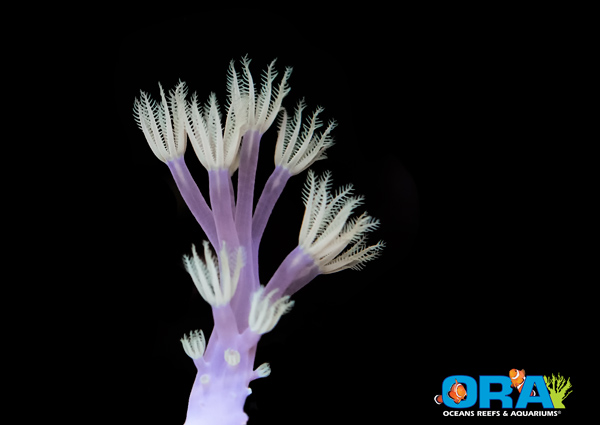 You would be hard pressed to find a more visually appealing soft coral in all of the aquarium hobby than the new ORA Vargas Cespitularia, whose commercial availability has only just been announced. This latest addition to the vast library of ORA aquacultured corals was donated by the world famous Tony Vargas, who gave them a couple of frags two years ago. The coral has thrived in ORA’s systems, demonstrating a level of hardiness that is much appreciated in the captive world, but nobody was sure about the coral’s identity, at least up until the experts were brought in.

Because identifying corals isn’t always a walk in the park, ORA sent samples of the Vargas Cespitularia and a few others to coral expert Michael James of AquaTouch in Arizona. Michael took a very thorough approach to properly identifying the coral, using various microcsopic techniques to measure sclerites and other morphological features. He eventually landed on the species Cespitularia erecta while at the same time highlighting the difficulty in identifying corals, especially when it comes to factors like coral coloration and geographical distribution. If you would like to read Michael’s paper, here is the PDF found on the ORA website. There are plenty of images detailing the morphological features that Michael viewed during the ID process.

Like with most soft corals, especially those of the Cespitularia variety, maintaining this coloration won’t be the easiest of tasks. Over time, the sharp contrast between the coral’s tentacles and body will likely fade into a single color, obviously taking away from its appeal. To maintain that beautiful color, proper lighting and pristine water quality are a must. Supplements contaning iodine are also said to help, as will proper coral foods.