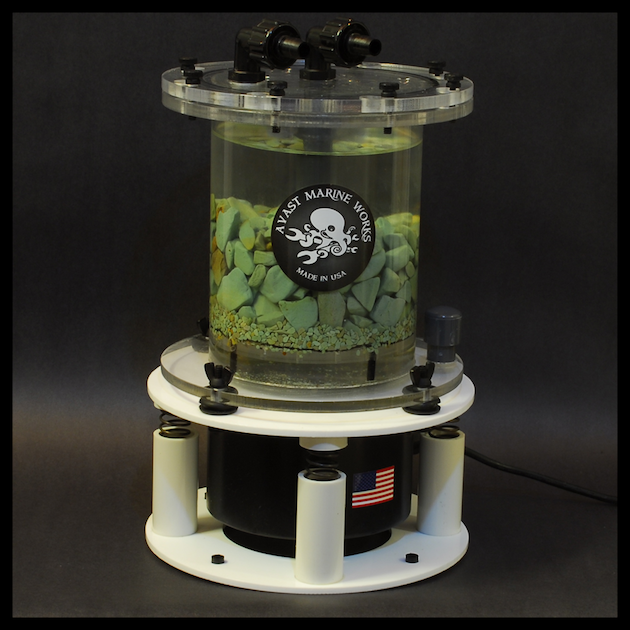 AVAST Marine Works is looking to shake things up a bit in the world of zeolite use with the release of their new Vibe media reactor. Because zeolites have to be agitated daily, many hobbyists simply avoid the nutrient control system altogether, favoring less time intensive methods instead. That attitude might change for some with this new reactor, which automatically agitates the media throgh the use of “Amplitude Resonance Reactor” technology.

The Vibe works by using a special vibration-inducing assembly to agitate the media gently and for short periods of time. The media jumps around and rotates, knocking off layers of bacterial film (called mulm) that often accumulate on the surface of the zeolite stones.

In addition to agitating zeolites, the Vibe also works well for other media like carbon, GFO, and calcium carbonate. The “correctly calibrated vibration frequency and amplitude” agitate the media enough to break up channeling and to knock of any buildup, while at the same time being gentle enough to not grind up any friable media.

Priced at $379.99, the Vibe has a footprint of 9.5″ around, with an overall height of 15.5″. It can house roughly 10 cups (2.5L) of various media. It comes stock with union disconnects, an integrated ball valve, dosing port, and kink resistant tubing. On top of all that, AVAST Marine Works is also offering a $50 rebate for hobbyists who do a video review on the Vibe and share it with them. The Vibe officially started shipping last week, and already online stores like Aquarium Specialty are selling them.

To see the Vibe in action, check out these two video clips.