Trending
You are at:Home»Aquarium Equipment»Thief Makes Off with Thousands of Dollars Worth of Aquarium Gear 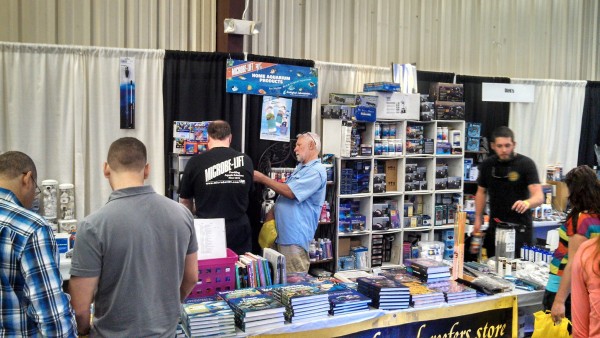 If you’ve ever been to one of the larger aquarium events, then chances are you’ve met Dirk, owner of Dirk’s The Real Reefers Store. Dirk often has a booth that is usually oozing with aquarium equipment, and his longstanding presence within the community has led to many friendships and happy customers. Like many entrepreneurs, Dirk has an interesting business model that has been quite successful over the years, but it has also subjected him to a bit of trouble lately. Unlike most retailers, Dirk is a mobile aquarium equipment retailer who travels the country hitting up tons of events. He tows a trailer full equipment with him everywhere he goes, and recently that trailer full of thousands of products was stolen. In addition to the theft, Eye Candy Corals, a vendor who travels with Dirk, was also hit hard when their show tank was intentionally poisoned, causing all of the corals to bleach out.

There has been a huge ground swelling of support for Dirk in his unfortunate situation, and we would be remiss if we didn’t do whatever we could too help. So, we are reaching out to our readers to help track down the thief. According to the various reports, which all say the same thing, Dirk’s trailer was stolen in Columbus, Ohio.

Chances are someone will try to unload this equipment at some point, and that’s where the aquarium community needs to step up. We encourage everyone, especially those in the Ohio area, to pay attention to local forums, Craigslist, eBay, and any other place where aquarium equipment might surface. If you find someone and report them, there is a $1000 reward in place depending on what all is recovered.

Here is a statement from Dirk himself, which highlights some of the stolen items.

Some of you have, some of you have not heard…my truck was stolen in Columbus, Oh last Sunday morning. It was before a swap set up so there was a lot of stuff-stuffed in it.
A LOT of this is very unique to me and to the industry. I am throwing out a hail mary pass that if enough know about it, can tell a few people, list it on your boards, check your local Craigs list, Ebay, Amazon, STORES, maintanance firms large or small….someone might see something.
I have a few photo’s to show some of the items
To me things that will stick out
-The coral/glow sticks…NO one has them in quantities. They are 18″ up to 72″ long and in green, orange and red.
-The cubes I store things in are from Target called Itso cubes. They are white and have 2 bolted together. They are 14 1/2″, all the way around, obviously 2 of them will be 29″ long/high. They stack pretty nice and hold a LOT of stuff. Hydor, Mag, Maxi-jet and other pumps and power heads. There are prices on the upper side of many of the cubes.
-The drawers that also stack nicely are from Iris, they have not been made in 5-7 years. I checked because I wanted more of them, the company just giggled and said I was a bit late. They are filled with Elos, Radium, Ushio, XM MH se bulbs, test kits, cleaning magnets and lots of parts
-5′ silver truck box
-2-black Contico boxes approx 34x24x24″
-Tongs 12″ angled with red coated tips, 24″ tongs no coating
-Skimmers from Coralife, Hydor, Aquatic life
-UV’s from Coralife and Tetra and replacement bulbs
-2/3/4′ T5 bulbs, 13/18/24/28/55/66/96w PC bulbs
-Salifert and SeaChem test kits
-Leds 6 to 48″ long from Marineland, Aquatic Life
-4′ Coralife 4 bulb T5
-Black plastic tool box filled with Ushio, Phoenix, AB de MH bulbs
This could go on for pages, do what you can to get the word and photos out. Most of this is going to stick out, with who ever might get some or all. I will offer a reward of up to $1000 depending on what is recovered.
thanks, Dirk
651 388 7319
reefgrip@hotmail.com