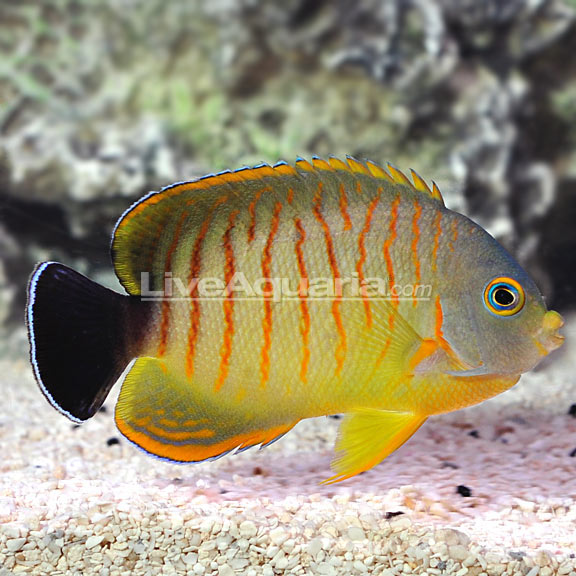 Rare angelfish seem to be dominating the rare fish market these days. The Tigerpyge angelfish, a Centropyge hybrid so named for its light yellow coloration and tiger-like stripes, is another very rare find in the aquarium trade that just popped up in LiveAquaria’s Diver’s Den a couple of days ago. This small gem from Indonesia is actually a hybrid between a lemonpeel angelfish (Centropyge flavissima) and a blacktail angel (C. eibli), and it is a jawdropping specimeen that nicely blends the best features of each of its parents. This tigerpyge has an asking price just south of $1500.

The tigerpyge isn’t a newcomer to the aquarium trade by any means, as individuals have been trickling in for at least the past four or five years up to this point. Despite the numerous years of the fish being available, however, only a handful have been imported over that time, and each time the asking price has been around the $1500 mark. Hybrid fish are rare in this hobby, and when they look this good they usually have a strong demand that keeps the price elevated. The demand is so high, in fact, that we are surprise the fish is still available at the time of writing this article.

This hybrid angelfish takes on more of the blacktail angel’s traits, but it ditches the gray body for a much yellower one, no doubt a trait handed down from its lemonpeel parentage. Regardless of what traits come from which parent fish, this tigerpyge is an amazing specimen that is sure to be a prized addition to any rare angelfish collector’s collection.