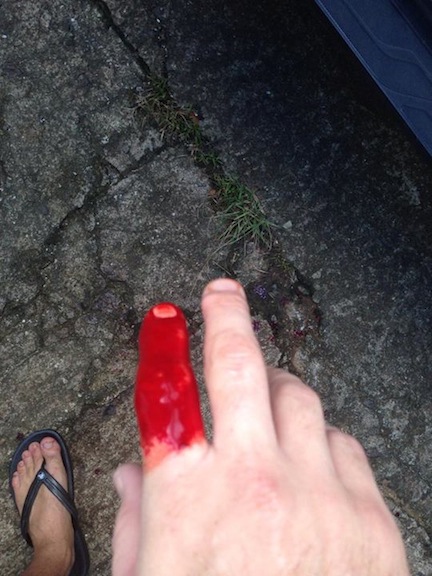 Picture this. You are quietly working in your aquarium, being careful to not distress your fish or corals, then, out of nowhere, one of those normally docile fish viciously attack, drawing blood and instilling fear into the very core of your soul for an eternity. We may have taken that a bit too far, but the basic premise is still valid. Daniel Linehan, founder of Tropical Fish Emporium LLC, had just such an experience recently when an orange shoulder tang decided to unleash the fury on his hand. The encounter ultimately led to a sliced finger that gushed blood.

We weren’t told very much about the circumstances of the encounter, but despite that information, we thought it was still a very interesting topic to share. Tangs are known for being fairly docile creatures. Excluding the occasional tang-on-tang fighting when two or more fish are struggling to assert dominance in an aquarium, tangs are generally well behaved, at least toward aquarium keepers. Some are even so calm that they will eat food straight from a person’s hand.

That said, there are those situations (this being one of them), where the surgeonfish fully live up to their name. Tangs come well equipped with a lateral scute on their caudal penduncle (fancy way of saying the thin space separating the body from the tail). Ths scute is sharp, and is often used to ward off predators or assert dominance with conspecifics. In most situations, you’ll see the fish posturing in such a way that they draw attention to their tails, often rubbing their tails in a seemingly playful fashion against the hand of an aquarium keeper. Unfortunately, not all of those encounters end with a chuckle, as some significant injuries like the one above can occur.

The take home message for this story is to never underestimate just how dangerous your fish can be, even if they don’t have sharp teeth or elaborate spines.

A big thanks goes out to Daniel for letting us share this image.