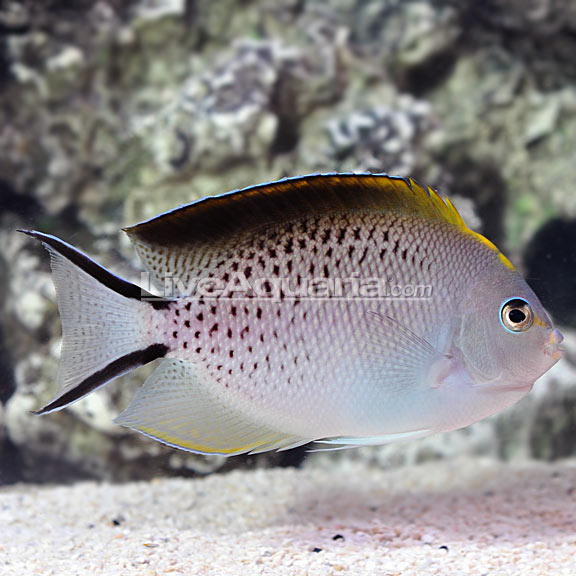 The aquarium hobby is full of hybrid fish, and regardless of whether or not they’re the result of captive breeding or a rare find from the wild, we just can’t get enough of them. This is especially true when the fish represents a combination of species that we don’t often see mixed together. LiveAquaria brings us our newest hybrid to talk about, as they recently listed this Spotbreast x Lamarck/Bellus hybrid angelfish for sale in their ever popular Diver’s Den. This truly amazing fish is believed to be the cross between a swallowtail angelfish (Genicanthus melanospilos) and either a lamarck’s angelfish (G. lamarcki) or a bellus angelfish (G. bellus), and is currently listed for $1200.

While LiveAquaria hasn’t publicly settled on the identification of the parents, we confidently believe that it’s a hybrid between the swallowtail and lamarck’s angelfish. The tail striping and yellow coloration on the dorsal fin clearly point to G. melanospilos, while the body spots are indicative of G. lamarcki. We could certainly see why the bellus angelfish was considered, especially given the fact that all of three species have nearly identical geographical distributions.