Trending
You are at:Home»Aquarium Equipment»Neptune Systems Looking for Beta Testers for their Apex Fusion Software 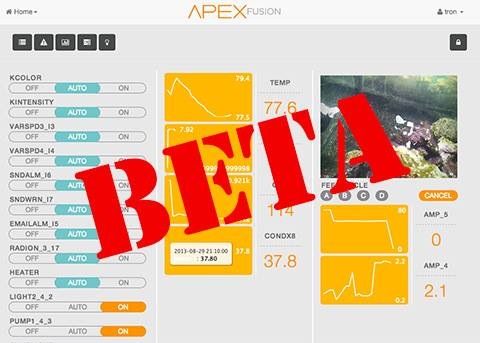 Listen up all of you would-be guinea pigs, Neptune Systems is looking to try out the beta version of their upcoming Apex Fusion software. According to a recent announcement, beta versions of their Apex controller firmware and their highly touted Apex Fusion service will become available later this month. Due to the groundswelling of requests from hobbyists to be beta testers, Neptune is making the system available in a limited supply. To be considered, all you have to do is go to the Neptune Systems website and fill out an application letting them know a little about your system. There is no listed minimum requirements to be a beta tester, and it would appear that Neptune Systems will focus on Apex, Apex Lite, and Apex Jr. users alike.

For those of you not familiar with Apex Fusion, it is a new service that will allow Apex users to access and modify the settings of their controllers from the cloud. The Fusion service will reside on Neptune System’s own servers, and users will experience a streamlined experience thanks to the use of wizards that will remove many of the programming barriers that have made controller use frustrating for some.

Another way Neptune is making their controller system so much simpler is the fact that they designed the Fusion software with mobilility in mind. Fusion was built specifically for mobile devices. Now, that isn’t saying that computer users are left out in the cold. The system adapts beautifully to desktops and laptops, but the mobile version isn’t a watered down version that is lacking features.

Look for the Apex Fusion to roll out later this month, and if you’re one of the lucky beta testers, we’d love to hear how the system works for you.