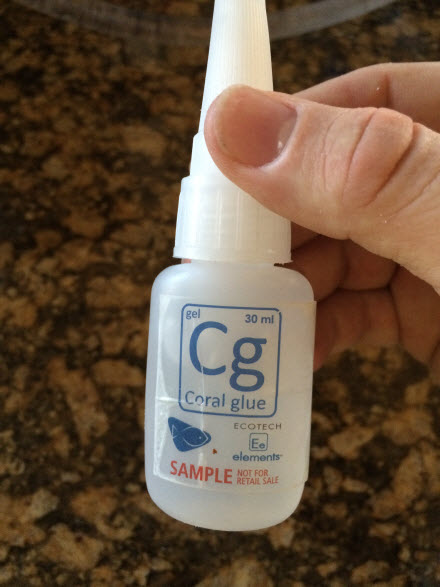 Approximately two years ago, I received a sample bottle of EcoTech Marine’s Coral Glue to try out after sending in a pump for a little warranty work. It was a happy little surprise in the box that I wasn’t expecting, and upon receiving it, I immediately set my sights on the little colored sticks in my tank to see why everyone was raving about the glue. Like most other cyanoacrylate based glue products, it held the frags to ceramic, aragonite, and plastic plugs just fine, but it’s what I discovered just the other day that really shocked me.

As I was doing a water change in my desktop nano, I noticed a couple of polyps got knocked off one of my Zoanthid colonies. Not wanting them to go to waste, I quickly scooped them up and set them aside so that I could attempt to save them. I went to the refridgerator and started shuffling through my small collection of super glues. It is highly recommended that you store opened super glue containers in the fridge to keep the glue from totally drying out.

Well, it has been quite a long time since I’ve fragged anything, to be totally honest. I had basically shut down my tanks about a year ago in order to move, and I’ve just never gotten things totally back up and running at the new place. I keep hoping that I’d install the big in-wall system of my dreams, but that’s looking less and less like reality at this point, but I digress.

So, I started looking at all of the super glue that was on the frigid shelf and I happened across my old, half-used bottle of EcoTech Marine Coral Glue. Not wanting to open up a new package of those small dollar store glue packs, I proceeded to test my luck with the Coral Glue. To my surprise, the glue was still in liquid form within the bottle. I dried off the base of the zoa polyps, popped the top on the glue, and added a dab to the top of the frag plug. The lid unscrewed easily and the glue came out oh so smoothly, which is not the same experience I’ve had with other glue products where it’s always a struggle.

The glue set in seconds and the frag was done. Simple as that. It was placed back into the aquarium and when the lights kicked on as scheduled, the polyps opened up and all was good.

At this point, I would argue that there is no better super glue product in the aquarium hobby. Sure, there are plenty others that work just as good, in terms of actual gluing, but the bottle is what makes EcoTech’s product so special. The applicator tip doesn’t clog, the cap doesn’t get stuck to the bottle, and the glue is always fluid (until it dries on a plug of course). It is a superior product, and we wish we had more stuff to frag just so we had more reasons to use it.

In parting, here is a video we made showing the Cora Glue in action. This video was when we first got the glue, and it was created roughly two years ago.