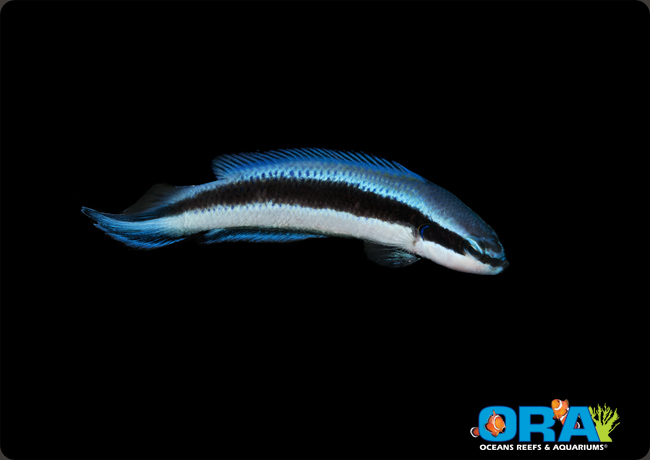 Oceans Reef & Aquariums has had many surprises for us since the beginning of this year, and they have yet to stop. Today, they released the newest addition to their line of captive bred fish, the ORA Electric Indigo Dottyback,

Back in 2006, ORA released the Indigo Dottyback, a hybrid of two fish they had been breeding for years, the Orchid Dottyback and the Striped Dottyback. Wanting the best out of this fish, ORA kept working on this hybrid, keeping those individuals with more color and the best markings, and that resulted in this new beautiful ORA Electric Indigo Dottyback.

This dottyback’s predecessors sport two color schemes while the electric sports three. It has a black band running down the center of its body, it is a much bolder stripe than that of the Indigo Dottyback. Also the bottom portion of the fish is a very crisp white color. Its best feature would have to be the light blue slightly turquoise coloration on top. The Electric Indigo also has a beautiful caudal filament found in its Striped Dottyback lineage.

Like other dottybacks the Electric Indigo Dottyback can change its color depending on this mood or comfort level. Once completely acclimated and settled in your aquarium they are just a fish to have. The Electric Indigo is also rather peaceful.

Look for this fish at your LFS for they are bound to start hitting stores soon.