Trending
You are at:Home»Aquarium Livestock»Rare Ghost White Longnose Butterflyfish Pops Up in Thailand 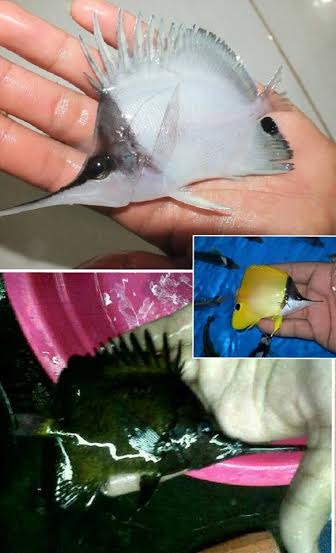 Some more unusual fish are coming to light thanks to the crew at Ocean and Sea BKK Thailand, which late last year showed off a really awesome xanthic undulate triggerfish. The fish on today’s agenda are the insanely rare ghost white longnose butterflyfish (Forcipiger longirostris) and the uncommonly found all-black longnose butterflyfish, of the same species. The Ghost Longnose Butterflyfish exhibits a rather impressive white coloration that is blemish-free. In fact, the fish has natural patterning all the way down to the placement of its false eye-spot and black wedge-shaped coloring on its face.

The black butterfly, on the other hand, is jet black save for some randomly distributed patches of what look to be yellow, though this could just be the way the light is hitting the fish. Regardless, two really awesome fish.

Pictured in the middle is a normal looking F. flavissimus, another longnose butterflyfish that is markedly similar to F. longirostris and enjoys a far broader distribution.