Trending
You are at:Home»Aquarium Equipment»Man Blinded by UV Lamp in His Pond 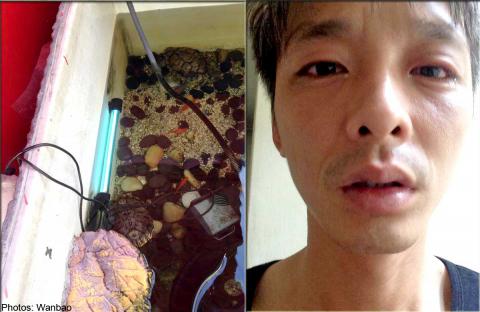 Aquariums present significant health risks, whether it be dangerous toxins from fragging zoanthids or powerful stings from anemones. But it’s not just the animals that pack a punch. The aquarium equipment can be dangerous too. As one pond keeping hobbyist quickly found out, ultraviolet (UV) sterilizers can have a huge impact on ones health. According to a story published on Your Health, 34-year-old Andy Ng was partially blinded after leaving his UV lamp on while he was cleaning his pond. Apparently, he was in the process of cleaning his lamp for the first time since it was installed about a year ago, but failed to cut power to the unit. The 20cm long sterilizer lamp damaged the outer layer of Mr. Ng’s corneas, leaving him partially blind for 12 long hours.

But the effects weren’t immediate. Andy took about an hour and half to clean the pond, all the while letting the UV sterilizer burn away at his eyes. Later in the evening, his eyes became inflamed and irritated, so he attempted to wash them and put eye drops in. The pain unceasing, Andy went to bed but awoke around midnight to the feeling of intense pain that was accompanied by an inability to keep his eyes open longer than a few seconds. Eventually, the pain and loss of eyesight would wear off, but you can rest assured that he won’t be keeping his UV lamp on while he cleans his pond.