Trending
You are at:Home»Aquarium Livestock»Pseudojuloides edwardi, a New Pencil Wrasse Species Discovered in the Aquarium Trade 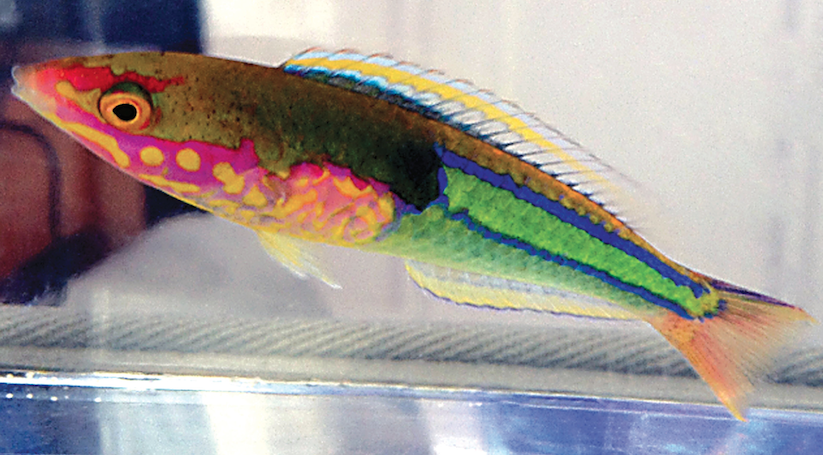 Wrasses are arguably the most diverse group of fish in the ocean, and according to a new journal entry on the Ocean Science Foundation, a new and very flamboyant member is being added to that group. To make the news even more exciting, the species was discovered not by scientific exploration, but by eagle-eyed professionals in the aquarium industry, further adding to the importance of the hobby to the scientific and conservation communities.

In July of last year, Greenwich Aquaria imported a beautiful pencil wrasse from Kenya, quickly noticing the fish was different. They shared the images of the fish on their social media channels, at the same time claiming the fish was a new species. Almost a year later, that claim was confirmed in the scientific article penned by Benjamin Victor and John Randall, which we linked to above. The new species, named Pseudojuloides edwardi after Jason Edward from the aquarium store, differs from its two sibling species, P. severnsi from Indonesia and the Mauritian P. erythrops in numerous ways, including confirmed genetic differences.

Genetically speaking, P. edwardi are very close to P. severnsi, differing in only 3 base pairs out of 652 total pairs in the mitochondrial DNA. It’s a tiny difference, but well enough to lead to pretty obvious phenotypic differences. The genetic differences are likely a result of geographic isolation from the parent species, and interestingly are expressed primarily on the color of the wrasse’s face, where most if the fish’s sexual displays take place.